The Rubin Museum of Art is a museum dedicated to the collection, display, and preservation of the art and cultures of the Himalayas, the Indian subcontinent, East Asia and other regions within Eurasia, with a permanent collection focused particularly on Tibetan art. It is located at 150 West 17th Street between the Avenue of the Americas (Sixth Avenue) and Seventh Avenue in the Chelsea neighborhood of Manhattan in New York City.

The museum originated from a private collection of Himalayan art which Donald and Shelley Rubin had been assembling since 1974. In 1998, the Rubins paid $22 million for the building that had been occupied by Barneys New York, a designer fashion department store that had filed for bankruptcy. The building was remodeled as a museum by preservation architects Beyer Blinder Belle. The original six-story spiral staircase was left intact to become the center of the 25,000 square feet (2,300 square meters) of exhibition space.

The museum opened on October 2, 2004, and displays more than 1,000 objects including paintings, sculpture, and textiles, as well as ritual objects from the 2nd to the 20th centuries. The new facade on 17th Street and the five floors of galleries were influenced by Tibetan art, and were conceived by New York-based museum architects Celia Imrey and Tim Culbert. Its graphic identity was conceived by graphic designer Milton Glaser.

Besides exhibitions based on the museum's permanent collection, it also serves as a venue for national and international traveling exhibitions. The museum is affiliated with the Himalayan Art website to advance the study of Himalayan arts and culture.

In 2011, the museum announced that founders Donald and Shelley Rubin would give a five-year, $25 million gift to support operations, exhibitions, and programs. Donald Rubin also planned to step down as chief executive, although the couple were to continue to lead the museum's board.

The 70,000-square-foot museum occupies what was formerly a portion of the Barneys department store in Manhattan's Chelsea neighborhood. It was acquired in 1998 and renovated extensively from 2000 to 2004. The renovation and new design elements were the results of a collaboration headed by the architectural firm of Beyer Blinder Belle and including Atelier Imrey Culbert (associate museum designers) and Milton Glaser Incorporated. Many of the architectural details within the building were retained, most notably Andree Putman's steel-and-marble staircase that spirals through the six-story gallery tower. In addition to gallery space for featured exhibitions, the museum includes space for contemporary and historical photography, an art-making studio, a theater for multimedia events and performances, a café, and a gift shop. In September 2011, the museum opened a new 5,000 square-foot Education Center adjacent to the main museum building. The new space provides greatly expanded spaces to better facilitate lifelong learning and serve more visitors in deeper, more substantial ways. The Education Center was designed by Lee H. Skolnick Architecture + Design Partnership. 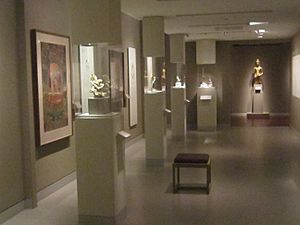 The second-floor gallery with objects from the permanent collection

Among the museum's inaugural exhibitions were "Methods of Transcendance" and "Portraits of Transmission" (both October 2004-January 2005) and "The Demonic Divine in Himalayan Art" (October 2004-March 2006). In 2006, a three-part exhibition called "Holy Madness" spotlighted siddhas with "Portraits of Tantric Siddhas," "Mahasiddhas at Gyantse," and "Mahasiddhas at Alchi." Not limited in its focus to Buddhist and Hindu religious objects, "I See No Stranger: Early Sikh Art and Devotion" (September 2006-January 2007), "Bon: The Magic Word" (November 2007-February 2008), and "Victorious Ones: Jain Images of Perfection" (September 2009-February 2010) exhibited works related to each of those faiths. June thru August 2008, the museum held an exhibit entitled Buddha in Paradise which was made up of "40 works, from the 13th to the early 20th century, of painting, sculpture, and ritual texts" from the museums collection. In 2010, the "Gateway to Himalayan Art" exhibition opened on the museum's second floor. Presenting the fundamentals of Himalayan art, it explains the symbolism, iconography, and ritual implements in the artworks as well as the materials from which they are made. The exhibit was to remain on view until 2014, with yearly rotations of specific objects. A two-year exhibit on the third floor, "Masterworks: Jewels of the Collection" (March 2011-January 2013), highlights the stylistic diversity of the museum's holdings and the connections between Himalayan and neighboring artistic traditions.

The Rubin Museum offers an array of on- and off-site educational programs, as well as public programs such as talks and discussions; film screenings; live music, dance, poetry, and other performances; and art demonstrations. The museum continues to refine a museum-wide access program in order to meet the needs of individuals with disabilities and special needs, language challenges, and at-risk and underserved segments of the population. A visit to the Rubin Museum is enhanced by the presence of guides in the galleries, American Sign Language tours, verbal imaging and touch tours, and a wheelchair-accessible facility. Assistive listening devices and wheelchairs are also provided.

All content from Kiddle encyclopedia articles (including the article images and facts) can be freely used under Attribution-ShareAlike license, unless stated otherwise. Cite this article:
Rubin Museum of Art Facts for Kids. Kiddle Encyclopedia.