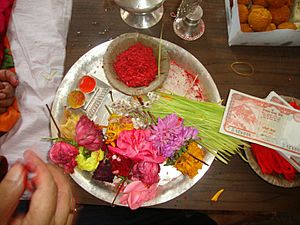 The red Tika and Jamara 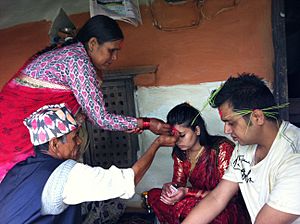 It is the longest festival in Bikram Sambat and Nepal Sambat yearly calendar. The festival is 15 days long and the first, seventh, eighth, ninth, tenth and the fifteenth days are the most important days. It is regarded as the biggest and most important festival in Nepal. It falls in the month of September or October (Ashwin or Kartik in Bikram Sambat calendar). It starts from bright lunar fortnight of Ashwin and ends on Purnima (full moon day). This festival is the symbol of victory of good over evil.

All content from Kiddle encyclopedia articles (including the article images and facts) can be freely used under Attribution-ShareAlike license, unless stated otherwise. Cite this article:
Dashain Facts for Kids. Kiddle Encyclopedia.