Pope Leo I facts for kids 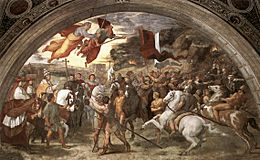 Raphael's The Meeting between Leo the Great and Attila depicts Leo, escorted by Saint Peter and Saint Paul, meeting with the Hun king outside Rome.

Leo was made Bishop of Rome on 29 September 440. In other words, he became pope.

Leo is one of only two popes who are called "the Great". The other "great" is the first pope named Gregory.

In 452, Leo I peacefully convinced Attila the Hun not to destroy and plunder Rome. This made him a legendary figure in Italy.

Leo also wrote many scholarly books. One of them, a "Tome" on the Nature of Christ, was read out to both the Roman Emperor and to the Patriarch of Constantinople. Afterwards, they followed Leo's recommendations, and officially accepted certain religious matters, and rejected others. These decisions had many political implications, in many areas of the Eastern Roman Empire, for centuries to come.

All content from Kiddle encyclopedia articles (including the article images and facts) can be freely used under Attribution-ShareAlike license, unless stated otherwise. Cite this article:
Pope Leo I Facts for Kids. Kiddle Encyclopedia.