Centre Georges Pompidou is an art museum in Paris. It opened in 1977, and is named after Georges Pompidou, a former President of France. It houses the largest museum for modern art in Europe. 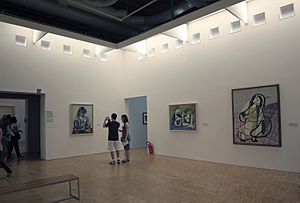 Pablo Picasso's works in the Centre

The Centre Pompidou was intended to handle 8,000 visitors a day. In its first two decades it attracted more than 145 million visitors, more than five times the number first predicted. As of 2006[update], more than 180 million people have visited the centre since its opening in 1977. However, until the 1997-2000 renovation, 20 percent of the centre's eight million annual visitors—in the main foreign tourists—rode the escalators up the outside of the building to the platform for the sights.

Since 2006, the global attendance of the centre is no longer calculated at the main entrance, but only the one of the Musée National d'Art Moderne and of the public library (5,209,678 visitors for both in 2013), but without the other visitors of the building (929,431 in 2004 or 928,380 in 2006, for only the panorama tickets or cinemas, festivals, lectures, bookshops, workshops, restaurants, etc.).

Several major exhibitions are organised each year on either the first or sixth floors. Among them, many monographs:

All content from Kiddle encyclopedia articles (including the article images and facts) can be freely used under Attribution-ShareAlike license, unless stated otherwise. Cite this article:
Centre Georges Pompidou Facts for Kids. Kiddle Encyclopedia.