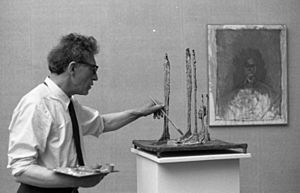 Coming from an artistic background, he was interested in art from an early age. Alberto attended the Geneva School of Fine Arts. His brothers Diego (1902–1985) and Bruno (1907–2012) would go on to become artists and architects as well. Additionally, his cousin Zaccaria Giacometti, later professor of constitutional law and chancellor of the University of Zurich, grew up together with them, having been orphaned at the age of 12 in 1905.

In 1922, he moved to Paris to study under the sculptor Antoine Bourdelle, an associate of Rodin. It was there that Giacometti experimented with Cubism and Surrealism and came to be regarded as one of the leading Surrealist sculptors. Among his associates were Miró, Max Ernst, Picasso, Bror Hjorth, and Balthus.

Between 1936 and 1940, Giacometti concentrated his sculpting on the human head, focusing on the sitter's gaze. He preferred models he was close to—his sister and the artist Isabel Rawsthorne (then known as Isabel Delmer). This was followed by a phase in which his statues of Isabel became stretched out; her limbs elongated. Obsessed with creating his sculptures exactly as he envisioned through his unique view of reality, he often carved until they were as thin as nails and reduced to the size of a pack of cigarettes, much to his consternation. A friend of his once said that if Giacometti decided to sculpt you, "he would make your head look like the blade of a knife".

During World War II, Giacometti took refuge in Switzerland. There, in 1946, he met Annette Arm, a secretary for the Red Cross. They married in 1949.

After his marriage his tiny sculptures became larger, but the larger they grew, the thinner they became. For the remainder of Giacometti's life, Annette was his main female model. His paintings underwent a parallel procedure. The figures appear isolated and severely attenuated, as the result of continuous reworking.

He frequently revisited his subjects: one of his favourite models was his younger brother Diego.

In 1958 Giacometti was asked to create a monumental sculpture for the Chase Manhattan Bank building in New York, which was beginning construction. Giacometti's work on the project resulted in the four figures of standing women—his largest sculptures—entitled Grande femme debout I through IV (1960). The commission was never completed, however, because Giacometti was unsatisfied by the relationship between the sculpture and the site, and abandoned the project.

In 1962, Giacometti was awarded the grand prize for sculpture at the Venice Biennale, and the award brought with it worldwide fame. Even when he had achieved popularity and his work was in demand, he still reworked models, often destroying them or setting them aside to be returned to years later.

The prints produced by Giacometti are often overlooked. Some of his most important images were in editions of only 30 and many were described as rare in 1970.

In his later years Giacometti's works were shown in a number of large exhibitions throughout Europe. Riding a wave of international popularity, and despite his declining health, he traveled to the United States in 1965 for an exhibition of his works at the Museum of Modern Art in New York. As his last work he prepared the text for the book Paris sans fin, a sequence of 150 lithographs containing memories of all the places where he had lived.

Giacometti died in 1966 of heart disease (pericarditis) and Chronic Obstructive Pulmonary Disease at the Kantonsspital in Chur, Switzerland. His body was returned to his birthplace in Borgonovo, where he was interred close to his parents.

With no children, Annette Giacometti became the sole holder of his property rights. She worked to collect a full listing of authenticated works by her late husband, gathering documentation on the location and manufacture of his works and working to fight the rising number of counterfeited works. When she died in 1993, the Fondation Giacometti was set up by the French state.

In May 2007 the executor of his widow's estate, former French foreign minister Roland Dumas, was convicted of illegally selling Giacometti's works to a top auctioneer, Jacques Tajan, who was also convicted. Both were ordered to pay €850,000 to the Alberto and Annette Giacometti Foundation.

Giacometti was one of the most important sculptors of the 20th century. His work was particularly influenced by artistic styles such as Cubism and Surrealism.

All content from Kiddle encyclopedia articles (including the article images and facts) can be freely used under Attribution-ShareAlike license, unless stated otherwise. Cite this article:
Alberto Giacometti Facts for Kids. Kiddle Encyclopedia.