The Vancouver Art Gallery (VAG) is an art museum in Vancouver, British Columbia, Canada. The museum occupies a 15,300-square-metre-building (165,000 sq ft) adjacent to Robson Square in downtown Vancouver, making it the largest art museum in Western Canada by building size. Designed by Francis Rattenbury, the building the museum presently occupies was originally opened as a provincial courthouse, before it was re-purposed for museum use in the early 1980s. The building was designated as the Former Vancouver Law Courts National Historic Site of Canada in 1980.

The museum was opened to the public in 1931 in a building designed by architectural firm Sharp and Johnston. The museum expanded its first building once in 1950, before plans were undertaken to move the institution to the former provincial courthouse building. The museum was relocated to the provincial courthouse in 1983. Plans were undertaken by the museum in the late 2000s and 2010s to relocate the institution to a new facility in Larwill Park.

The Vancouver Art Gallery's permanent collection serves as a repository of art for the Lower Mainland region, and has approximately 12,000 works by artists from Canada, and around the world. In addition to exhibiting works from its collection, the museum has also organized and hosted a number of travelling arts exhibitions.

In April 1931, the Vancouver Art Gallery Association was established under the provincial Society Act, in order to establish and maintain a museum for the City of Vancouver. The Association opened the art museum to the public at 1145 West Georgia Street on 5 October 1931. The building was designed by architectural firm Sharp and Johnston, and featured four galleries, one of which included a sculpture hall, a lecture hall, and a library. The cost to construct the building was approximately CA$40,000. 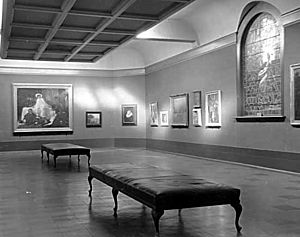 Interior of the museum's first building at West Georgia Street, 1932

Works by British, and other European artists dominated the works exhibited at the museum at the time of its opening. In 1938, the museum was the one of the buildings occupied by unemployed protesters during a sitdown strike in the weeks leading up to Bloody Sunday. Paintings were not damaged while the protesters occupied the building.

In 1950, the museum conducted renovations to its building, reshaping the design of the building towards an International Style of architecture; with the removal of the building's Art Deco facade. Renovations were also conducted to accommodate the 157 works bequeathed to the museum by Emily Carr, with the building reopened to the public in 1951. Cost for the renovation was approximately CA$600,000, funded by the City of Vancouver government, and funds raised by Lawren Harris.

In 1983 the museum was relocated to its present location, the former provincial courthouse. The building continues to be owned by the Government of British Columbia, although the museum occupies the building through a 99-year sublease signed with the City of Vancouver government in 1974; who in turn leases the building from the provincial government. Before the re-purposed building was opened to the public, it was renovated by architect Arthur Erickson at a cost of CA$20 million, as a part of his larger three city-block Robson Square redevelopment. The gallery connects to the rest of Robson Square via an underground passage below Robson Street. 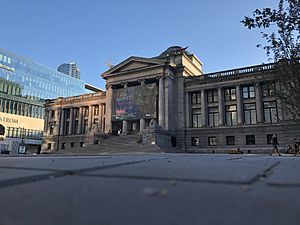 The museum was relocated to the former provincial courthouse in 1983

Plans to build a new building for the museum were undertaken in 2004, a result from its need for more exhibition and storage space for its collections. In November 2007, the museum publicly announced plans to move to seek approval from Vancouver City Council to build a new building at Larwill Park, a block formerly occupied by a bus depot on the corner of Cambie and Georgia streets. However, in May 2008, the museum and the City of Vancouver government announced its intention to relocate to an area occupied by the Plaza of Nations. The Vancouver City Council later reversed its decision in April 2013, opting to approve the original proposed site in Larwill Park. In September 2013, the museum formally issued requests for qualifications to construct the new building, receiving responses from 75 architectural firms from 16 countries. In April 2014, Herzog & de Meuron's bid was selected by the museum. The development of the Vancouver Art Gallery's new building is the first project for the architectural firm in the country. Perkins and Will's Vancouver branch was contracted as the project's executive architects.

The cost to construct the building has been estimated to be CA$330 million, with the federal and provincial governments expected to provide CA$200 million, and the museum expected to raise the rest from public and private donors. Should the museum secure its relocation, the museum would occupy the building under similar arrangements as the former courthouse, with the museum leasing the property from the City of Vancouver. Completion of the building was originally announced to be in 2020 by the architect selection committee in 2014. However, as of September 2019, developments for the new building have stalled due to a funding dispute between the federal and provincial governments. 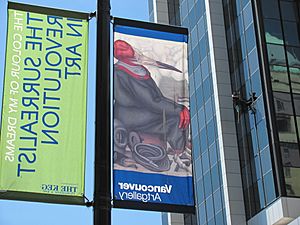 Banners outside the museum advertising the Surrealist Revolution in Art exhibition. The exhibition was hosted at the gallery in 2011.

The Vancouver Art Gallery has organized and hosted a number of temporary, and travelling exhibitions. A select list of exhibitions held at the museum since 2005 include: 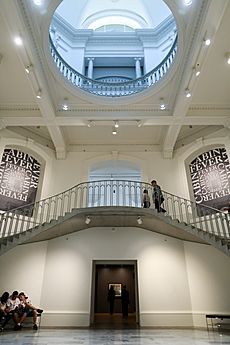 Void stairs inside the building. Completed in 1906, the building was later designated as a National Historic Site in 1980.

The design of the building includes ionic columns, a central dome, formal porticos, and ornate stonework. The building was constructed using marble imported from Alaska, Tennessee, and Vermont. Construction for the building began in 1906 and replaced the previous courthouse at Victory Square. At the time, the building contained 18 courtrooms. An annex designed by Thomas Hooper was added to the western side of the building in 1912. It was declared a heritage site and retains the original judges' benches and walls as they were when the building was a courthouse.

In March 2007, the 2010 Olympic countdown clock was placed in the front lawn of the building. It was open for free for the public to see. The clock has since been disassembled, with one half going to BC Place and the other to Whistler Village. 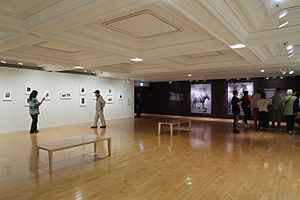 Works from the permanent collection exhibited in the museum 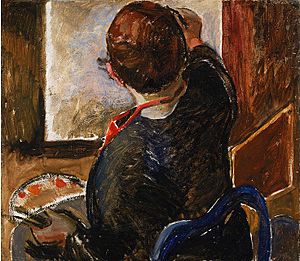 Untitled (Self-Portrait) by Emily Carr, c. 1924–25. The collection has a number of works by Carr.

The Vancouver Art Gallery Library and Archives is a non-circulating library that specializing in modern, contemporary and Canadian art. Its holdings include more than 50,000 books and exhibition catalogues, 30 journal subscriptions, 5,000 files that document various artists, art forms, and works. Access to the museum's library and archives require a scheduled appointment.

The museum's archives contain the institution's official records since its founding in 1931. In addition to institutional documents, the archives also includes files from B.C. Binning, and the books and serials where Bill Bissett's concrete poetry was published.

The Vancouver Art Gallery offers a wide range of public programs throughout the year, including live performances marketed under the FUSE program, scholar's lectures, artist's talks, as well as dance and musical performances. In its most recent year, the gallery has featured over 60 presenters, including historian Timothy Brook, writer Sarah Milroy, and Emily Carr scholar, Gerta Moray. In May 2015, the gallery welcomed architect Jacques Herzog as he presented his first lecture in Canada on architecture and the new Vancouver Art Gallery building.

All content from Kiddle encyclopedia articles (including the article images and facts) can be freely used under Attribution-ShareAlike license, unless stated otherwise. Cite this article:
Vancouver Art Gallery Facts for Kids. Kiddle Encyclopedia.