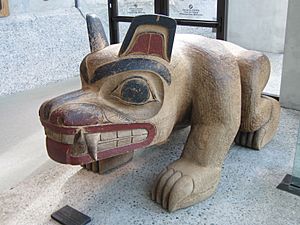 William Ronald Reid Jr. OBC RCA (12 January 1920 – 13 March 1998) (Haida) was a Canadian artist whose works include jewelry, sculpture, screen-printing, and paintings. Producing over one thousand original works during his fifty-year career, Reid is regarded as one of the most significant Northwest Coast artists of the late twentieth century.

Some of his major works were featured on the Canadian $20 banknote of the Canadian Journey series (2004–2012).

William Ronald Reid Jr., was born in Victoria, British Columbia; his father was American William Ronald Reid Sr., of Scottish-German descent and his mother, Sophie Gladstone Reid, was from the Kaadaas gaah Kiiguwaay, Raven/Wolf Clan of T'anuu, more commonly known as the Haida, one of the First Nations of the Pacific coast. However, Reid was raised without knowledge of his Haida heritage due to the oppressive measures of the Indian Act.

When Reid was in his early twenties, he visited his ancestral home of Skidegate for the first time since he was an infant. He desired to connect with his relatives and his Indigenous identity, later commenting that "in turning to his ancestors, in reclaiming his heritage for himself, he was . . . looking for an identity which he had not found in modern western society." In Skidegate Reid spent time with his maternal grandfather, Charles Gladstone, a traditional Haida silversmith. Gladstone first taught Reid about Haida art, and through him, Bill inherited his tools from his great-great-uncle Charles Edenshaw, a renowned artist who died the year Reid was born.

In 1944, Reid married his first wife, Mabel van Boyen. In 1948, the couple moved to Toronto, where Reid further developed his keen interest in Haida art while working as a radio announcer for CBC Radio and studying jewelry making at the Ryerson Institute of Technology. During his spare time, he made regular trips to the Royal Ontario Museum and admired the carved Haida pole installed in the main stairwell, which originated from his grandmother's village of T'aanuu. Upon completing his studies, Reid made his first Haida-inspired piece of jewelry, a bracelet resembling the ones he saw his maternal aunt wear when he was a child.

In 1951, Reid returned to Vancouver, where he eventually established a studio on Granville Island. He became greatly interested in the works of Edenshaw, working to understand the symbolism of his work, much of which had been lost along with many Haida traditions. During this time Reid also worked on salvaging artifacts, including many intricately carved totem poles, which were then moldering in abandoned village sites. He assisted in the partial reconstruction of a Haida village in the University of British Columbia Museum of Anthropology.

Reid's most popular works are three large bronze sculptures. Two depict a canoe filled with human and animal figures: one black, The Spirit of Haida Gwaii, is at the Canadian Embassy, Washington, D.C., in the United States; and one green, The Jade Canoe, is at Vancouver International Airport, in British Columbia. The third sculpture, Chief of the Undersea World, depicts a breaching orca and is installed at the Vancouver Aquarium. Plaster casts of these sculptures are held by the Canadian Museum of History in Gatineau, Canada.

On 30 April 1996 Canada Post issued 'The Spirit of Haida Gwaii, 1986-1991, Bill Reid' in the Masterpieces of Canadian art series. The stamp was designed by Pierre-Yves Pelletier based on the sculpture The Spirit of Haida Gwaii (1991) by William Ronald Reid in the Canadian Embassy, Washington, United States. The 90¢ stamps are perforated 12.5 x 13 and were printed by Ashton-Potter Limited.

Two of his sculptures, The Raven and the First Men and Spirit of Haida Gwaii, are prominently featured on the $20 note in the Bank of Canada's new Canadian Journey (2004) issue, paired with a quotation from author Gabrielle Roy.

Reid participated in the blockades of logging roads which helped save the rain forests of Gwaii Haanas (South Moresby). He stopped work on the sculpture in Washington during this period to protest the destruction of the forests of Haida Gwaii, by the time Bill Reid was alive the archipelago was called the Queen Charlotte Islands. In 1981, he married Martine de Widerspach-Thor (Mormanne), a French anthropologist.

Having dedicated the later part of his life to the creation of new works and these tasks of curation, Reid died on 13 March 1998, of Parkinson's disease, in Vancouver. In July 1998 friends and relatives paddled Lootaas, a large cedar canoe carved by Reid for Expo 86, on a two-day journey along the Pacific coast to bring his ashes to Tanu Island in Haida Gwaii, the site of his mother's village of New Clew.

All content from Kiddle encyclopedia articles (including the article images and facts) can be freely used under Attribution-ShareAlike license, unless stated otherwise. Cite this article:
Bill Reid Facts for Kids. Kiddle Encyclopedia.