Juan Carlos I of Spain facts for kids

Juan Carlos is the grandson of Alfonso XIII, the last king of Spain before the abolition of the monarchy in 1931 and the subsequent declaration of the Second Spanish Republic.

Juan Carlos was born in Rome, Italy, during his family's exile and spent his early years living there and came to Spain in 1947 to continue his studies. After completing his secondary education in 1955, he began his military training and entered the General Military Academy at Zaragoza. Later, he attended the Naval Military School, the General Academy of the Air, and finished his tertiary education at the University of Madrid.

In 1962, Juan Carlos married Princess Sophia of Greece and Denmark in Athens. The couple had two daughters and a son together. Juan Carlos first began periodically acting as Spain's head of state in the summer of 1974. The following year Juan Carlos became king on 22 November 1975, the first reigning monarch since 1931.

Juan Carlos, soon after his accession introduced reforms to dismantle the previous regime and begin the Spanish transition to democracy. This led to the approval of the Spanish Constitution of 1978 in a referendum, which re-established a constitutional monarchy. In 1981, Juan Carlos played a major role in preventing a coup that attempted to revert Spain to Francoist government in the King's name.

In 2008, he was considered the most popular leader in all Ibero-America. Hailed for his role in Spain's transition to democracy. In 2014, Juan Carlos, citing personal reasons, abdicated in favour of his son, who acceded to the throne as Felipe VI. 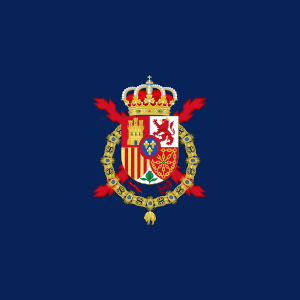 Royal Standard as King of Spain

Juan Carlos was born to Infante Juan, Count of Barcelona, and Princess María Mercedes of Bourbon-Two Sicilies in Rome, Italy, where his grandfather King Alfonso XIII of Spain and other members of the Spanish royal family lived in exile following the proclamation of the Second Spanish Republic in 1931. He was baptized as Juan Carlos Alfonso Víctor María de Borbón y Borbón-Dos Sicilias. He was given the name Juan Carlos after his father and maternal grandfather, Prince Carlos of Bourbon-Two Sicilies.

His early life was dictated largely by the political concerns of his father and General Franco. He moved to Spain in 1948 to be educated there after his father persuaded Franco to allow it. He began his studies in San Sebastián and finished them in 1954 at the San Isidro Institute in Madrid. He then joined the army, doing his officer training from 1955 to 1957 at the Military Academy of Zaragoza.

All content from Kiddle encyclopedia articles (including the article images and facts) can be freely used under Attribution-ShareAlike license, unless stated otherwise. Cite this article:
Juan Carlos I of Spain Facts for Kids. Kiddle Encyclopedia.