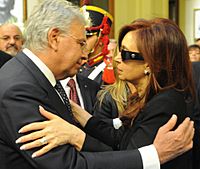 Felipe González Márquez (born 5 March 1942) is a Spanish socialist politician. He was the General Secretary of the Spanish Socialist Workers' Party (PSOE) from 1974 to 1997. To date, he remains the longest-serving Prime Minister of Spain, after having served four successive mandates from 1982 to 1996. He is married and has three children.

All content from Kiddle encyclopedia articles (including the article images and facts) can be freely used under Attribution-ShareAlike license, unless stated otherwise. Cite this article:
Felipe González Facts for Kids. Kiddle Encyclopedia.