Kingdom of Navarre facts for kids

The Kingdom of Navarre, originally the Kingdom of Pamplona, was a Basque-based kingdom that occupied lands on either side of the western Pyrenees, alongside the Atlantic Ocean between present-day Spain and France.

It was a was a small kingdom that existed from 841 to 1820. The kingdom was located roughly in the Basque Country on both sides of the Pyrenees mountains. In 1512, it was split into a Spanish part, and a French part. In 1620, the French part, called Lower Navarre was merged with France. The Spanish part existed until 1820. The capital of the kingdom was Pamplona.

Today, significant parts of the ancient Kingdom of Navarre comprise the Spanish autonomous communities of Navarre, Comunidad Autónoma Vasca and La Rioja and the French community of Pays Basque.

Following the 1839–1841 treaties, conflict with Madrid's central government contributed to the Third Carlist War, largely centred in the Basque districts (over in 1876). Myriad parties and factions emerged in Navarre demanding different degrees of restoration of native institutions and laws. Catholicism and traditionalism became major driving forces behind Navarre politics. 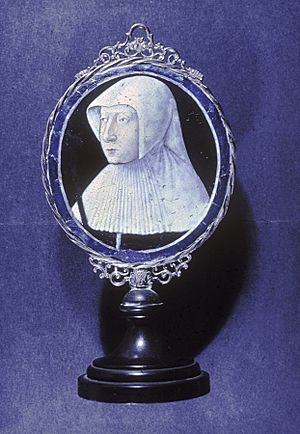 The territory formerly known as Navarre now belongs to two nations, Spain and France, depending on whether it lies south or north of the Western Pyrenees. The Basque language is still spoken in most of the provinces.

All content from Kiddle encyclopedia articles (including the article images and facts) can be freely used under Attribution-ShareAlike license, unless stated otherwise. Cite this article:
Kingdom of Navarre Facts for Kids. Kiddle Encyclopedia.