Kingdom of León facts for kids

The Kingdom of León was an independent kingdom situated in the northwest region of the Iberian Peninsula. It was founded in AD 910 when the Christian princes of Asturias along the northern coast of the peninsula shifted their capital from Oviedo to the city of León. The Caliphate of Córdoba was gaining power, and began to attack León.

The kings of León and Navarre allied against Córdoba but were defeated in Valdejunquera, in 920. For the next 80 years, the Kingdom of León suffered civil wars, Moorish attack, internal intrigues and assassinations, and the partial independence of Galicia and Castile, thus setting back the date of Spain's reconquest, and weakening the Christian forces.

In the Royal Decree of 30 November 1833, the Kingdom of León was considered one of the Spanish regions and divided into the provinces of León. In 1978, these three provinces of the region of León were included along with six provinces of the historic region of Old Castile to create the autonomous community of Castile and León. 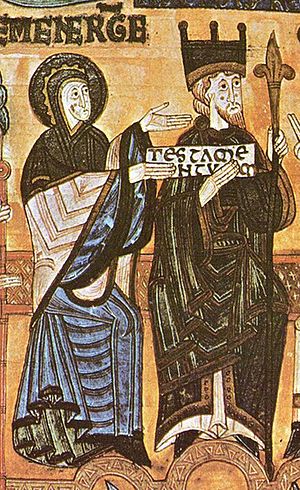 The city of León was founded by the Roman Seventh Legion. It was the headquarters of that legion in the late empire and was a centre for trade in gold, which was mined at Las Médulas nearby.

In 540, the city was conquered by the Arian Visigothic king Liuvigild, who did not harass the already well-established Roman Catholic population. In AD 717, León fell again, this time to the Moors. However, León was one of the first cities retaken during the Christian reconquest of the Iberian peninsula, and became part of the Kingdom of Asturias in AD 742.

León was a small town during this time, but one of the few former Roman cities in the Kingdom of Asturias which still held significance. During Visigothic times, the city had served as a bishopric, and incorporating the city into Asturias brought legitimacy to the Asturian monarchs who sought to lead a unified Iberian church, during a time when most of the Iberian Peninsula was governed by Muslim powers. 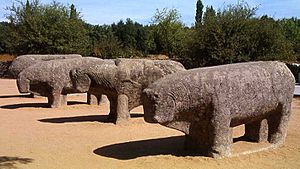 Bulls of Guisando in the Ávila. These are found in many towns of the western half of Castile and León

In the 19th century, the Kingdom of León declared war, together with Galicia and Asturias, against France, and organised the Junta General del Reino de León as its own government. The modern region of the Kingdom of León was established in 1833 and was divided into León, Zamora, and Salamanca provinces.

At present, León is composed of the provinces of León, Zamora, and Salamanca, is now part of the autonomous community of Castile and León within the modern Kingdom of Spain.

All content from Kiddle encyclopedia articles (including the article images and facts) can be freely used under Attribution-ShareAlike license, unless stated otherwise. Cite this article:
Kingdom of León Facts for Kids. Kiddle Encyclopedia.