Kingdom of Galicia facts for kids

The Kingdom of Galicia (anciently Gallaecia) was a medieval kingdom in Iberia for two distinct periods. In the first period, it was a barbarian state. In this sense it the name for the land ruled by the Suebi, a Teutonic people, in Hispania. Their kingdom corresponded to the Roman province of Gallaecia. In 910, the region of Galicia gained independence. It had this independence off and on for over two centuries until it was finally united to León in the partition of the realm in 1157. It was then united ever thereafter. 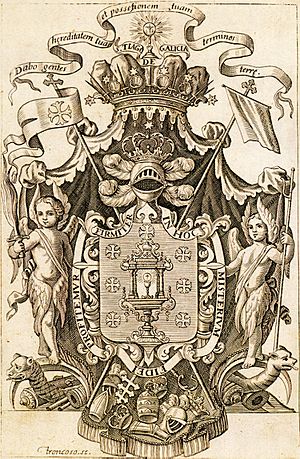 Arms of the kingdom of Galicia 1750

The Sueve kingdom in Gallaecia lasted from 410 to 584 and seems to have enjoyed relatively stable government for great part of that time. As in most Germanic invasions, the number of the Suebic invaders is estimated to be small, no more than 30,000 people.

In 438 Hermeric, the King of Suevi recognized the peace with the Hispano-Roman local population and, weary of fighting, abdicated in favour of his son Rechila. The invasion of Visigoths in the Iberian Peninsula from 416 sent from the West to fight the Vandals and the Alans resulted into an expansion of the Suebi Kingdom.

In 448 Rechila died, leaving the crown to his son Rechiarius who had converted to Roman Catholicism circa 447. Catholicism had became the official recognised religion, as opposed to the old ways of the pagan Suebi.

In 456 Rechiarius died after being defeated by the Visigoth king Theodoric II, and the Sueve glory began to fade. The Sueve kingdom got cornered to the hostile northwest and political division arose across the river Minius (Miño) with two different kings ruling in both sides of the river.

Despite the Visigoths pressure, the Suebi maintained their nominal independence on the northwest until 584, when the Visigoth King Leovigild, on the pretext of conflict over the succession, put off the Sueve kingdom. Andeca, the last king of the Suebi, held out for a year before surrendering in 585.

Kingdom of Galicia and Portugal 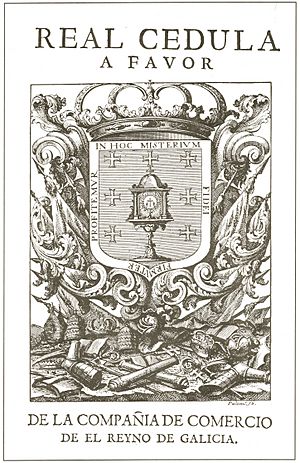 Comercial Company of the Kingdom of Galicia 18th century

The Kingdom of Galicia and Portugal (as it is now known) was formed in 1065 after the County of Portugal declared independence following the death of Ferdinand I of Castile. In 1063, Ferdinand I had divided his kingdom among his sons. Galicia was allotted to García. The Count of Portugal, Nuno II Mendes, took advantage of the internal tension caused by the civil war between Ferdinand's sons to finally break off and declare himself an independent ruler.

However, in 1071, King García defeated and killed him at the Battle of Pedroso and took his territory, adding the title of King of Portugal to his previous ones. In 1072, García himself was defeated by his brother Sancho II of Castile and fled. In that same year, after Sancho's murder Alphonso VI became king of León and Castile thus reuniting his father's realm. From that time Galicia remained part of the kingdom of Castile and León, although under differing degrees of self-government. Although it did not last for very long, the Kingdom set the stage for future Portuguese nationalism under Henry, Count of Portugal.

At the Battle of São Mamede (1128), Afonso I of Portugal overcame the troops under Count Fernando Peres de Trava of Galicia, making his mother his prisoner and exiling her forever to a monastery in León. Thus the possibility of incorporating Portugal into a kingdom of Galicia was eliminated and Afonso become sole ruler (Dux of Portugal).

All content from Kiddle encyclopedia articles (including the article images and facts) can be freely used under Attribution-ShareAlike license, unless stated otherwise. Cite this article:
Kingdom of Galicia Facts for Kids. Kiddle Encyclopedia.