Alfonso VII of León and Castile facts for kids 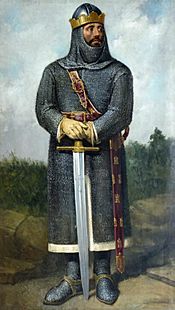 Alfonso VII 'The Emperor', of Castile and León

Alfonso VII (1 March 1105 – 21 August 1157), born Alfonso Raimúndez, he was called the Emperor (el Emperador). He was given rule in Galacia alongside his mother Urraca of León in 1107. Alfonso became the King of Galicia in 1111. He became King of León and Castile in 1126 after his mother's death. Alfonso adopted the style of Emperor in his charters. In 1135 in a ceremony at the court of Leon he was officially recognize as Emperor. He was the son of Urraca of León and Raymond of Burgundy. He was the first of the House of Burgundy to rule in the Iberian peninsula. During his rule Portugal declared independence, in 1128. It was recognized as being independent in 1143.

All content from Kiddle encyclopedia articles (including the article images and facts) can be freely used under Attribution-ShareAlike license, unless stated otherwise. Cite this article:
Alfonso VII of León and Castile Facts for Kids. Kiddle Encyclopedia.