Sancho Garcés VI (Basque: Antso VI.a; 21 April 1132 - 27 June 1194), called the Wise (Basque: Jakituna, Spanish: el Sabio) was King of Navarre from 1150 until his death in 1194. He was the first monarch to officially drop the title of King of Pamplona in favour of King of Navarre. With this action, he also changed the name of his kingdom. Sancho Garcés was responsible for bringing his kingdom into the political orbit of Europe. He was the eldest son of García Ramírez, the Restorer and Margaret of L'Aigle. 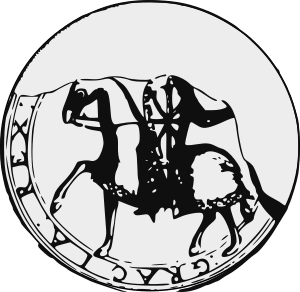 Sancho VI inherited a debilitated kingdom, subject of frequent raids by the Kingdom of Castile of Alfonso VII and by the County of Barcelona of Ramon Berenguer IV, also king of Aragon, who in 1140 had agreed the partition of the kingdom in the Treaty of Carrión.

He tried to repair the borders of his kingdom, which had been reduced by the Treaties of Tudején and Carrión, which he had been forced to sign with Castile and Aragón in his early reign. By the Accord of Soria, Castile was eventually confirmed in its possession of conquered territories. In the face of a possible Castilian military takeover of further western Navarrese territories, Sancho VI re-asserted royal authority by founding several towns in 1181, including San Sebastián, Vitoria and Treviño, among others.

He was hostile to Count Raymond Berengar IV of Barcelona, but Raymond's son King Alfonso II of Aragon divided the lands taken from Murcia with him by treaty of Sangüesa in 1168. In 1190, the two neighbours again signed a pact in Borja of mutual protection against Castilian expansion.

All content from Kiddle encyclopedia articles (including the article images and facts) can be freely used under Attribution-ShareAlike license, unless stated otherwise. Cite this article:
Sancho VI of Navarre Facts for Kids. Kiddle Encyclopedia.