Afonso I of Portugal facts for kids 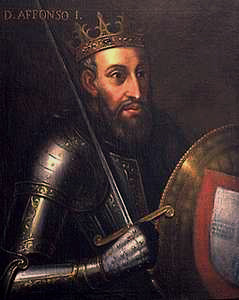 Alphonse I or Alphonzo I (in Portuguese Afonso I) (25 July 1109 - 6 December 1185) was the first king of Portugal. He is best known by his prince name Afonso Henriques.

Afonso Henriques was the son of Henry of Burgundy, Count of Portugal and Teresa of León.

He became King on 25 July 1139, after winning the Battle of Ourique. He doubled the area of Portugal with the Reconquista and was nicknamed the Conqueror (Port. o Conquistador). He died on 6 December 1185 in Coimbra.

All content from Kiddle encyclopedia articles (including the article images and facts) can be freely used under Attribution-ShareAlike license, unless stated otherwise. Cite this article:
Afonso I of Portugal Facts for Kids. Kiddle Encyclopedia.