Heraldry of León facts for kids 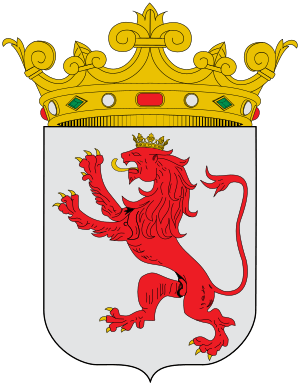 Coat of arms of León 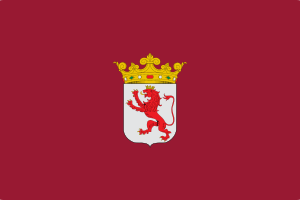 The lion is the heraldic symbol of the Spanish city of León and its province. It was also the symbol of the Kingdom of León before the kingdom of Spain existed. It was used for the first time in the coins minted by King Alfonso VII (1126–1157). Before that, the symbol mainly used by the Leonese kings in documents and on their coins was the cross. Since Alfonso VII's reign, the cross became more and more often replaced by the lion.

The first written reference of the lion as a symbol of the King and, therefore, of the kingdom, is in the Chronica Adefonsi Imperatoris. This was written during the reign of Alfonso VII. The lion is one of the oldest symbols used in heraldry in Europe that still exist. It is earlier than the castle, which was used by the neigbouring Kingdom of Castile.

The flag of León is red, with the coat of arms of in the middle.

All content from Kiddle encyclopedia articles (including the article images and facts) can be freely used under Attribution-ShareAlike license, unless stated otherwise. Cite this article:
Heraldry of León Facts for Kids. Kiddle Encyclopedia.