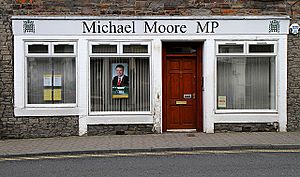 Representatives from electoral districts typically have offices in their respective districts. This photo shows the office of Michael Moore, a Member of Parliament (MP) in the UK

In the United Kingdom, a parliamentary constituency is sometimes called a Parliamentary seat or a Division. Constituencies for local government elections are called either Wards or electoral divisions.

The National Assembly for Wales has 40 constituencies elected by first past the post which are identical to the Welsh constituencies of the House of Commons. Its remaining 20 seats are selected by AMS.

The London Assembly has 14 constituencies elected by First-past-the-post voting. Its remaining 11 seats are also selected by AMS.

The United States House of Representatives has 435 constituencies each electing one member.

All content from Kiddle encyclopedia articles (including the article images and facts) can be freely used under Attribution-ShareAlike license, unless stated otherwise. Cite this article:
Constituency Facts for Kids. Kiddle Encyclopedia.