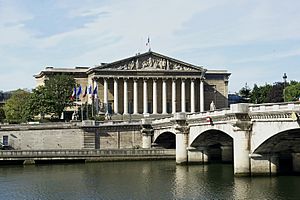 The Palais Bourbon is a large building in Paris. It is on the left bank of the River Seine. Today it is the home of the French National Assembly. It was originally built by Louise Françoise de Bourbon as a large townhouse for her own personal use. It was later the main Parisian residence of the Princes of Condé. 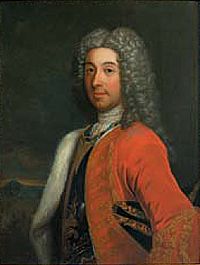 The Marquis of Lassay

Building began in 1722 under the direction of several prominent architects of the day. It was inspired by the "Grand Trianon" in the grounds of the Palace of Versailles. It was built close to the Hôtel de Lassay. That was the townhouse of the Marquis of Lassay. He was a nobleman the duchess had began having an affair with some years prior. The two buildings were actually connected by a linked corridor.

During the French Revolution the peoperty was seized as a bien national or property of the nation.

All content from Kiddle encyclopedia articles (including the article images and facts) can be freely used under Attribution-ShareAlike license, unless stated otherwise. Cite this article:
Palais Bourbon Facts for Kids. Kiddle Encyclopedia.