Marie Joseph Louis Adolphe Thiers ( 15 April 1797 – 3 September 1877) was a French statesman and historian. He was the second elected President of France, and the first President of the French Third Republic.

Thiers was a key figure in the July Revolution of 1830, which overthrew the Bourbon monarchy, and the French Revolution of 1848, which established the Second French Republic. He served as a prime minister in 1836, 1840 and 1848, dedicated the Arc de Triomphe, and arranged the return to France of the ashes of Napoleon from Saint-Helena. He was first a supporter, then a vocal opponent of Louis-Napoléon Bonaparte (who served from 1848 to 1852 as President of the Second Republic and as Emperor Napoleon III, reigning from 1852 to 1871). When Napoleon III seized power, Thiers was arrested and briefly expelled from France. He then returned and became an opponent of the government.

Following the defeat of France in the Franco-German War, which Thiers opposed, he was elected chief executive of the new French government and negotiated the end of the war. When the Paris Commune seized power in March 1871, Thiers gave the orders to the army for its suppression. At the age of seventy-four, he was named President of the Republic by the French National Assembly in August 1871. His chief accomplishment as president was to achieve the departure of German soldiers from most of French territory two years ahead of schedule. Opposed by the monarchists in the French assembly and the left wing of the Republicans, he resigned on 24 May 1873, and was replaced as President by Patrice de Mac-Mahon, Duke of Magenta. When he died in 1877, his funeral became a major political event; the procession was led by two of the leaders of the republican movement, Victor Hugo and Leon Gambetta, who, at the time of his death, were his allies against the conservative monarchists. 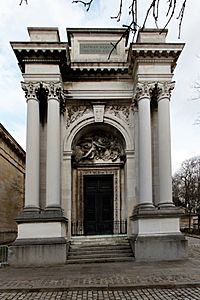 The tomb of Adolphe Thiers in Père Lachaise cemetery.

Contemporary judgements about the place of Thiers in history depended largely upon the politics of those doing the judging. The most virulent critic of Thiers was certainly Karl Marx, who had been forced to leave Paris when Thiers was head of the French government. In 1871 he described Thiers as follows: "Thiers, that monstrous gnome, has charmed the French bourgeoisie for almost half a century, because he is the most consummate intellectual expression of their own class corruption. ... Thiers was consistent only in his greed for wealth and his hatred of the men that produce it."

Victor Hugo lavishly praised Thiers when Thiers supported him in gaining a seat in the Academie Française, but later, when a candidate backed by Thiers defeated Hugo for a seat in the Assembly, Hugo wrote: "I have always felt for that celebrated statesman, eminent orator, that mediocre writer, that man with a narrow and small heart, an undefinable sentiment of admiration, aversion and disdain." Nonetheless, Hugo, along with Leon Gambetta, led the procession of mourners at Thiers' funeral.

Thiers achieved a place in French literature as the model for Eugène de Rastignac, one of the main characters in the La Comédie humaine of Honoré de Balzac. The character appears in twenty-eight of Balzac's novels. Rastignac's rapid rise from poverty to success in finance and politics, and his unusual family life, parallel those of Thiers.

Following the death of Thiers, Gustave Flaubert wrote about the massive crowds that appeared at his funeral. "This truly national demonstration greatly struck me. I did not like this king of the bourgeois, but it doesn't matter. Compared with the others who surrounded him, he was a giant, and in addition he had one great virtue; patriotism. No one better summed up France better than he did. That was the reason for the huge effect of his death."

After the student-worker uprising in Paris of May 1968, and during the presidency of the socialist François Mitterrand in the 1980s and 1990s, Thiers' reputation reached a low point; the new government renamed several Paris streets, squares and metro station for the revolutionary leaders of the Paris Commune, while historians of the left blamed Thiers for lack of attention to social issues and especially for the suppression of the Commune.

The historian Pierre Guiral wrote in 1986: "He was a founder, the Washington of France, a man full of weaknesses but an uncontested patriot. He founded the first french Republic which survived. He expelled the Prussians from France. From the Restoration, when he founded the journal called "The National", to 1871, when he defended the nation against divisions which threatened to destroy it, he was national." 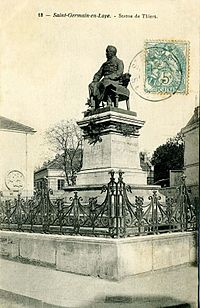 A statue of Thiers in Saint-Germain-en-Laye (about 1900) 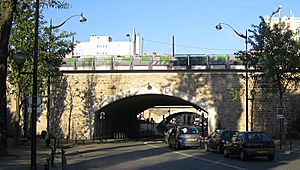 The Poterne-des-Peupliers, a vestige of the Thiers Wall around Paris

The reconstructed Hotel Thiers on Place Saint-George in Paris became, after his death, the headquarters of the Fondation Dosne-Thiers, which now is part of Institute of France It contains his library, his archives and a collection of personal effects. it can be consulted by requesting permission from the Institute of France. The house is also a regular venue for concerts of chamber music.

Thiers was responsible for the construction of Napoleon's tomb at Les Invalides, and for the completion of the column on Place Vendôme and the Arc de Triomphe, both of which he dedicated.

Thiers also built the ring of fortifications around Paris known as the Thiers Wall, of which a few traces can still be seen. The location of the wall now marks the city limits of Paris.

A small street and square in the 16th arrondissement in Paris are named for Thiers. There are streets and squares named for Thiers in Bordeaux, Nancy, Tours, Fontainebleau, Melun, Meudan, Chaumont, Graion, and his native Aix-en-Provence, and there is a Lycée Thiers in Marseille. There were formerly statues of Thiers in a number of French towns, including Nancy and Saint-Germain-en-Laye, but some were removed in the 1970s and 1980s.

All content from Kiddle encyclopedia articles (including the article images and facts) can be freely used under Attribution-ShareAlike license, unless stated otherwise. Cite this article:
Adolphe Thiers Facts for Kids. Kiddle Encyclopedia.