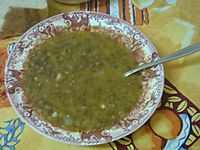 Lentil soup (Arabic: شوربة العدس‎code: ar is deprecated shorbit adas or shurba al-'adas, Turkish: Mercimek Çorbası, Hebrew: עדשה מרק nezid adashim) is a soup. It is served hot and made with lentils. It is popular all over the Middle East. Usually it is a vegetarian soup, but can also be made with meat stock. Red or green lentils may be used and in some recipes the lentils are boiled with vegetables such as carrots, potatoes, parsley and onion, and then pureed. Things commonly added include garlic, cumin, and lemon juice. Sometimes croutons are added to make it look good.

Lentil soup is mentioned in the Bible: In Genesis 25:34, Esau is prepared to give up his birthright for a pot of fragrant red lentil soup being cooked by his brother, Jacob.

The ancient Greek dramatist, Aristophanes, mentions lentil soup in his plays: He describes it as the "sweetest of delicacies."

Lentil soup was once a food for the poor. Today, it is recognized as highly nutritious and provides a good source of protein, fiber, iron and potassium.

All content from Kiddle encyclopedia articles (including the article images and facts) can be freely used under Attribution-ShareAlike license, unless stated otherwise. Cite this article:
Lentil soup Facts for Kids. Kiddle Encyclopedia.