Egg drop soup (Chinese: 蛋花湯; pinyin: Dànhuātāng) is a Chinese soup of wispy beaten eggs in chicken broth. Condiments such as black or white pepper, and finely chopped scallions and tofu are optional, but commonly added to the soup. The soup is made by adding a thin stream of beaten eggs to the boiling broth in the final moments of cooking, creating thin, silken strands or flakes of cooked egg that float in the soup. 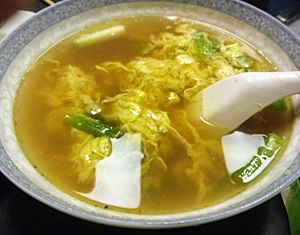 A bowl of egg drop soup in the United States.

In the United States egg drop soup is often one of the main soups offered in American Chinese cuisine, and is also called egg flower soup, a literal translation of its Chinese name, on the menus of some restaurants. Cornstarch may be used to thicken it.

In Chinese cuisine, egg drop soups have a thinner consistency than most common Western variants. Depending on the region, they may be garnished with ingredients such as tofu, scallion, bean sprouts and corn.

In Italy, stracciatella, a version made with egg and parmesan cheese, is popular.

In France, tourin, a garlic soup, is made with egg whites which are drizzled into the soup in a similar way to how traditional egg drop soup is made.

In Spain, the similar and traditional sopa de ajo ("garlic soup") uses egg whites to thicken the broth in a similar way.

In Austria, egg drop soup (Eierflockensuppe or Eierflöckchensuppe) is a simple, traditional recipe generally made for very young children or sick people. Scrambled eggs are mixed with flour and then poured into boiling soup in order to make small egg dumplings. Spices can be added to the egg-flour mixture according to taste.

There is a similar recipe in Polish cuisine (kluski lane, lit. 'poured noodles'), with the egg-flour mixture either poured directly into soup, or into boiling water, then strained and added to a soup or sauce. For children, often simmering milk (optionally with sugar) is used in place of soup.

In Russia, semolina is usually boiled in the chicken stock before the eggs are whisked in for a more substantial result, and flavored with chopped scallion and black pepper. Simple egg dough dumplings similar to lazy vareniki (варе́ники) or the Ukrainian halušky (галушка) are a frequent addition in the southern regions.

In Cyprus and Greece the egg is beaten and then slowly stirred in the soup so it does not curdle. Lemon and rice are the additional ingredients besides the chicken stock to make avgolemono (αβγολέμονο), originally a dish from Jewish cuisine.

All content from Kiddle encyclopedia articles (including the article images and facts) can be freely used under Attribution-ShareAlike license, unless stated otherwise. Cite this article:
Egg drop soup Facts for Kids. Kiddle Encyclopedia.