Kids Encyclopedia Facts
Not to be confused with Custard pie.

Custard tarts or flans pâtissier are a baked pastry consisting of an outer pastry crust filled with egg custard.

The development of custard is so intimately connected with the custard tart or pie that the word itself comes from Anglo-Norman *crustade (unattested), meaning a kind of pie. It is derived from Anglo-Norman crust (> English crust) corresponding to French croust. It is related to the 18th-century French term croustade, probably borrowed from the Italian crostata (already mentioned 13th century), derived from crosta (croûte in French), more probably than the Occitan croustado « tart ». Some other names for varieties of custard tarts in the Middle Ages were doucettes and darioles. In 1399, the coronation banquet prepared for Henry IV included "doucettys".

Medieval recipes generally included a shortcrust and puff pastry case filled with a mixture of cream, milk, or broth, with eggs, sweeteners such as sugar or honey, and sometimes spices. Recipes existed as early as the fourteenth century that would still be recognisable as custard tarts today. Tarts could also be prepared with almond milk during times of fasting such as Lent, though this was rather expensive and would have been available only to the well-off. Often, savoury ingredients such as minced pork or beef marrow were also added (the combining of sweet and savoury ingredients was more common in medieval England), but unlike a modern quiche the custard filling itself was invariably sweet. In Portugal, the tarts are dusted with cinnamon; in Britain, nutmeg is often used. 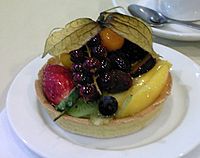 A fruit-topped tart with custard filling.

Modern custard tarts are usually made from shortcrust pastry, eggs, sugar, milk or cream, and vanilla, sprinkled with nutmeg and then baked. Unlike egg tarts, custard tarts are normally served at room temperature. They are available either as individual tarts, generally around 8 cm (3.1 in) across, or as larger tarts intended to be divided into slices.

Custard tarts have long been a favourite pastry in Britain and the Commonwealth, where they are often called "egg custard tarts" or simply "egg custards" to distinguish the egg-based filling from the commonly served cornflour-based custards. They are sold in supermarkets and bakeries throughout the UK.

In the UK, the custard tart is regarded as a classic British dish. A version by Marcus Wareing was selected on the BBC television programme Great British Menu as the final course of a banquet to celebrate Queen Elizabeth's 80th birthday. The tarts are either made as a single large tart from which slices are cut, or as smaller individual tartlets. Classically, they are invariably topped only with a dusting of nutmeg – fruit topping in the French style, or cinnamon dusting in the Dutch, is not typical.

Variations on the classic recipe include the Manchester tart, where a layer of jam is spread on the pastry before the custard is added. Other versions may have some fresh fruit, or rhubarb, cooked into the filling. Versions topped with elaborate arrangements of fruit show the influence of French pâtisserie.

The Indonesian version is called pai susu (milk custard pie) from Bali. This pastry consists of an outer pastry crust filled with egg custard and condensed milk, and then baked. Contrary to other versions of this pie, this Indonesian version is very flat, with the filling consisting of only one very thin layer of custard. Another type of Indonesian pie tart is pastel de nata (derived from Portuguese cuisine due to historical ties).

Custard tarts in France, where they are known as flans pâtissiers, may be filled with fruit, making them similar to clafoutis. Some may contain reconstituted shortbread.

All content from Kiddle encyclopedia articles (including the article images and facts) can be freely used under Attribution-ShareAlike license, unless stated otherwise. Cite this article:
Custard tart Facts for Kids. Kiddle Encyclopedia.