The egg tart started being sold in the early 20th century in Guangzhou (Canton), Guangdong province, inspired by the English custard tart. Guangzhou's status as the only port accessible to foreign traders led to the development of Cantonese cuisine having many outside influences. As Guangzhou's economy grew from trade and interaction with Britain, pastry chefs at the Western-style department stores in the city were asked to invent new pastries weekly to attract customers from competitors. The egg tart, featuring a lard-based puff pastry crust and a filling similar to steamed egg pudding (燉蛋), was invented by a department store for one of these "Weekly Special" competitions. The Zhen Guang Restaurant in Guangzhou is also credited with inventing the Chinese egg tart. As Macau was a Portuguese colony, Macau-style egg tarts are a variation of the pastel de nata but they have been influenced by Guangzhou-style egg tarts. 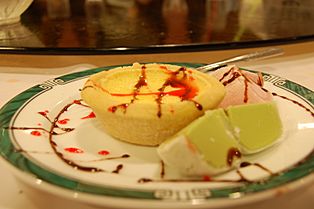 Egg tarts were introduced to Hong Kong via Guangzhou in the 1940s but initially could only be found in higher-end Western-style restaurants. In the 1960s, cha chaan tengs began to serve egg tarts, popularizing the pastry with the working-class Hong Kong population.

Hong Kong egg tarts are typically smaller and served in twos or threes, in contrast to the original Guangzhou egg tarts which were larger and could be served as a single item. The custard filling may be flavored with chocolate, green tea, abalone or bird's nest, and the outer shell may be made with shortcrust pastry or puff pastry.

In June 2014, the technique of egg tart production was formally included in the Intangible Cultural Heritage Inventory of Hong Kong. 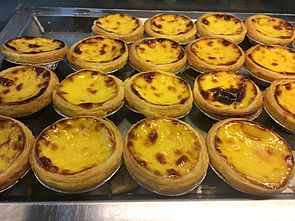 In 1989, British pharmacist Andrew Stow and his wife Margaret Wong opened Lord Stow's Bakery in Coloane, where they sold a Macau-style egg tart that attempted to recreate the pastel de nata. This variation is referred to in Chinese as po tat (葡撻; "Portuguese tart"). In 1999, Wong sold the recipe to KFC, which then introduced the Macau-style pastel de nata to other parts of Asia, including Singapore and Taiwan.

All content from Kiddle encyclopedia articles (including the article images and facts) can be freely used under Attribution-ShareAlike license, unless stated otherwise. Cite this article:
Egg tart Facts for Kids. Kiddle Encyclopedia.