Blancmange ( from French: blanc-manger) is a sweet dessert commonly made with milk or cream and sugar thickened with rice flour, gelatin, corn starch or Irish moss (a source of carrageenan), and often flavoured with almonds.

The historical blancmange originated some time in the Middle Ages and usually consisted of capon or chicken, milk or almond milk, rice and sugar and was considered to be an ideal food for the sick. Tavuk göğsü is a sweet contemporary Turkish pudding made with shredded chicken, similar to the medieval European dish.

The origin of the blancmange is obscure, but it is believed by some that it was a result of the Arab introduction of rice and almonds in early medieval Europe. However, there is no evidence of the existence of any similar Arab dishes from that period; though the Persian muhallebi is similar, its origins are uncertain. Variants of the dish appear in numerous European cultures with closely related names including biancomangiare in Italy and manjar blanco in Spain. Additionally, related or similar dishes have existed in other areas of Europe under different names, such as the 13th-century Danish hwit moos ("white mush"), and the Anglo-Norman blanc desirree ("white Syrian dish"); Dutch calijs (from Latin colare, "to strain") was known in English as cullis and in French as coulis, and was based on cooked and then strained poultry. The oldest recipe found so far for blancmange is from a copy of the oldest extant Danish cookbook, written by Henrik Harpestræng, who died in 1244, which dates it to the early 13th century at the latest. The Danish work may be a translation of a German cookbook, which is believed to have been based on a Latin or Romance vernacular manuscript from the 12th century or even earlier.

The "whitedish" (from the original Old French term blanc mangier) was an upper-class dish common to most of Europe during the Middle Ages and early modern period. It occurs in countless variations from recipe collections from all over Europe and was one of the few truly international dishes of medieval and early modern Europe. It is mentioned in the prologue to Geoffrey Chaucer's Canterbury Tales and in an early 15th-century cookbook written by the chefs of Richard II. The basic ingredients were milk or almond milk, sugar, and shredded chicken (usually capon) or fish, often combined with rosewater and rice flour and mixed into a bland stew. Almond milk and fish were used as substitutes for the other animal products on fast days and Lent. It was also often flavoured with spices like saffron or cinnamon and the chicken could be exchanged for various types of fowl, like quail or partridge. Spices were often used in recipes of the later Middle Ages since they were considered highly prestigious.

On festive occasions and among the upper classes, whitedishes were often rendered more festive by various colouring agents: the reddish-golden yellow of saffron; green with various herbs; or sandalwood for russet. In 14th-century France, parti-colouring, the use of two bright contrasting colours on the same plate, was especially popular and was described by Guillaume Tirel (also known as Taillevent), one of the primary authors of the later editions of Le Viandier. The brightly coloured whitedishes were one of the most common of the early entremets, edibles that were intended to entertain and delight through a gaudy appearance, as much as through flavour.

In the 17th century (1666), the durian fruit was compared to the blanc-mangé by Alexandre de Rhodes:

il est plein d'une liqueur blanche, épaisse & sucrée : elle est entierement semblable au blanc-mangé , qu'on sert aux meilleures tables de France; c'est une chose fort saine, & des plus delicates qu'on puisse manger
(it is full of a white liquor, thick and sweet: it is entirely similar to the blanc-mangé which is delivered at the best tables in France: it is a very healthy thing & of the most delicate one can eat) 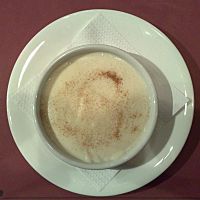 The Catalan menjar blanc, a variant of blancmange made without gelatine

The word blancmange derives from Old French blanc mangier. The name "whitedish" is a modern term used by some historians, though the name historically was either a direct translation from or a calque of the Old French term. Many different local or regional terms were used for the dish in the Middle Ages:

Though it is fairly certain that the etymology is indeed "white dish", medieval sources are not always consistent as to the actual colour of the dish. Food scholar Terence Scully has proposed the alternative etymology of bland mangier, "bland dish", reflecting its often mild and "dainty" (in this context meaning refined and aristocratic) taste and popularity as a sick dish.

All content from Kiddle encyclopedia articles (including the article images and facts) can be freely used under Attribution-ShareAlike license, unless stated otherwise. Cite this article:
Blancmange Facts for Kids. Kiddle Encyclopedia.