Bay of Pigs facts for kids

Kids Encyclopedia Facts
This page is about the geographical location. For the 1961 invasion at the bay, see Bay of Pigs Invasion.

The Bay of Pigs (Spanish: Bahía de Cochinos) is an inlet of the Gulf of Cazones located on the southern coast of Cuba. By 1910, it was included in Santa Clara Province, and then instead to Las Villas Province by 1961, but in 1976, it was reassigned to Matanzas Province, when the original six provinces of Cuba were re-organized into 14 new Provinces of Cuba.

The bay is historically important for the failed Bay of Pigs Invasion of 1961. The area is a site known for its diving, with an abundance of marine fauna, e.g. 30 species of sponges belonging to 19 families and 21 genera, to be found in the bay. 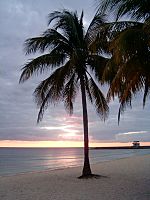 This bay is approximately 30 kilometres (19 mi) south of Jagüey Grande, 70 kilometres (43 mi) west of the city of Cienfuegos, and 150 kilometres (93 mi) southeast from the capital city Havana. On the western side of the bay, coral reefs border the main Zapata Swamp, part of the Zapata Peninsula. On the eastern side, beaches border margins of firm ground with mangroves and extensive areas of swampland to the north and east. At the north end of the bay, the village of Buena Ventura is adjacent to Playa Larga (Long Beach). 35 kilometres (22 mi) southeast of that, Playa Girón (Giron Beach) at the village of Girón, named after the notorious French pirate Gilberto Giron (c. 1604).

Playa Girón and Playa Larga were the landing sites for seaborne forces of armed Cuban exiles in the Bay of Pigs Invasion, an American CIA-sponsored attempt to overthrow the new government of Cuban Prime Minister Fidel Castro in April 1961.

According to Fidel Castro's former bodyguard, the late Juan Reinaldo Sánchez, Castro lived in great luxury and had a private island called Cayo Piedra in the Bay of Pigs, replete with "mansions, guest houses, a heliport, dolphinarium, turtle lagoon, his luxury yacht Aquarama – a gift from Leonid Brezhnev – and deep-sea fishing speedboat". 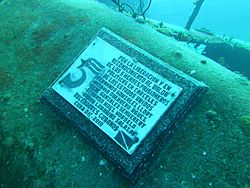 The Bay of Pigs is a relatively quiet site for diving. Dive centers exist in Playa Larga, Playa Girón and Caleta Buena. Twelve dive sites in the bay display excellent visibility of 20 to 40 metres (66 to 131 ft), an average water temperature of 22 °C (72 °F) in December and 29 °C (84 °F) in July. Walls of coral, caverns and a variety of fish (including the barracuda, lionfish and groupers, among others), coral and sponges can be found in the Bay of Pigs.

All content from Kiddle encyclopedia articles (including the article images and facts) can be freely used under Attribution-ShareAlike license, unless stated otherwise. Cite this article:
Bay of Pigs Facts for Kids. Kiddle Encyclopedia.