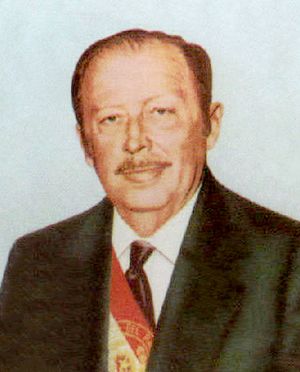 Alfredo Stroessner Matiauda (November 3, 1912 – August 16, 2006) was a dictator of Paraguay from 35 years (1969-1989). His entire career started after school at age 16 (1932) when he joined the Paraguayan army. He continued to aspire in the Military until 1951. In 1951 when he was commander in chief of the Paraguayan army he led an overthrow of president Federico Chavez. Since he was a sole candidate he was therefore elected president. During his 35 years of rule Alfredo Stroessner helped with economic progress, but anyone who criticized him was imprisoned. He clung to his power until 1989 when he lost his power as a dictator due to an overthrow. He died on August 16, 2006 in Brasilia under exile.

All content from Kiddle encyclopedia articles (including the article images and facts) can be freely used under Attribution-ShareAlike license, unless stated otherwise. Cite this article:
Alfredo Stroessner Facts for Kids. Kiddle Encyclopedia.