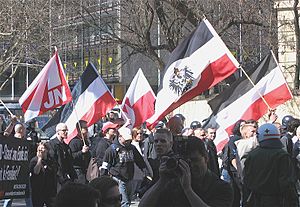 A demonstration organised by the youth movement of the right-wing National Democratic Party of Germany, in 2004 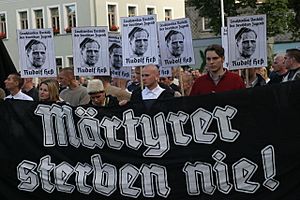 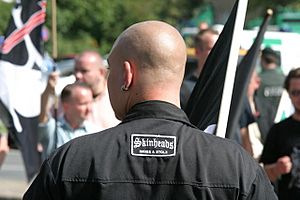 Some neonazis are skinheads.

Neo-Nazism means the ideology of some political groups who want to return to the beliefs and practices of Nazism after the end of World War II. Different groups have their own sets of beliefs and practices. Neo-Nazis believe in loyalty to Adolf Hitler, hating Jews (anti-Semitism), racism, belief in a Germanic master race, xenophobia (hating and fearing people from different countries), extremist nationalism, supremacy, militarism, and hatred of homosexuals (homophobia).

Neo-Nazis often use the symbols of Nazi Germany such as the swastika. Neo-Nazism has been linked to far-right political parties in England such as the National Front and the British Nationalist Party as well as being linked to the skinhead sub-culture.

All content from Kiddle encyclopedia articles (including the article images and facts) can be freely used under Attribution-ShareAlike license, unless stated otherwise. Cite this article:
Neo-Nazism Facts for Kids. Kiddle Encyclopedia.