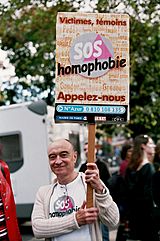 An anti-homophobia protester at a demonstration in Paris, in 2005

Homophobia is the fear or poor treatment of homosexuals. The word was created in the 1960s by a psychologist named George Weinberg. The word "homophobia" is often used together with the word "transphobia" in documents explaining human rights violation of LGBT people by United Nations and Council of Europe.

There are events to stop homophobia, like the "gay pride parades" and "International Day Against Homophobia" on May 17. It was first celebrated on 17 May 2005 in more than 40 countries. Argentina, Brazil, Mexico and Colombia have developed mass media campaigns against homophobia since 2002. In some places, it is illegal to treat people badly because they are homosexual, and it is a hate crime to hurt them for that reason. Laws against such discrimination have been made in several countries. Internationally, the Declaration of Montreal and the Yogyakarta Principles were adopted in 2006.

Successful strategies to prevent homophobic prejudice and bullying in schools have included teaching students about historical figures who were gay, or who suffered discrimination because of their sexuality. A person who is homophobic may be called a homophobe.

All content from Kiddle encyclopedia articles (including the article images and facts) can be freely used under Attribution-ShareAlike license, unless stated otherwise. Cite this article:
Homophobia Facts for Kids. Kiddle Encyclopedia.