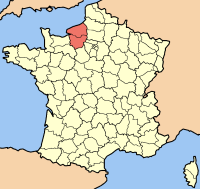 Upper Normandy is shown in red 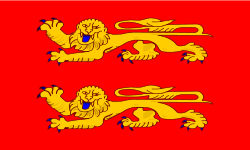 Upper Normandy (called Haute-Normandie in French) is a former region of France. It is now part of the administrative region of Normandy. The capital was Rouen, which is now the capital of Normandy. In 2007 about 1.9 million people lived in the region.

The region was the first producer of flax in France. It is also quite industrialized, specialising in petrochemical and pharmaceutical, as well as manufacturing industries.

All content from Kiddle encyclopedia articles (including the article images and facts) can be freely used under Attribution-ShareAlike license, unless stated otherwise. Cite this article:
Upper Normandy Facts for Kids. Kiddle Encyclopedia.