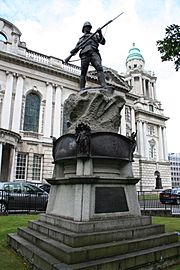 The regiment's history dates backs to the reign of King George III. In 1793 the British Army expanded to meet the commitments of the war with the French First Republic. As part of that expansion it raised two new regiments of foot, the 83rd and the 86th. In 1881, under the Childers Reforms, the 83rd and 86th were amalgamated into a single regiment, named the Royal Irish Rifles, one of eight infantry regiments raised and garrisoned in Ireland. It was the county regiment of Antrim, Down, Belfast and Louth, with its depot located at Victoria Barracks, Belfast. Militarily, the whole of Ireland was administered as a single command within the United Kingdom with Command Headquarters at Parkgate (Phoenix Park) Dublin, directly under the War Office in London.

The regiment suffered serious losses at the Battle of Stormberg in December 1899 during the Second Boer War. In October 1905, a memorial was erected in the grounds of Belfast City Hall in memory of the 132 who did not return. Field Marshal Lord Grenfell unveiled the memorial while the Times reported the event.

In 1908, the Volunteers and Militia were reorganised nationally, with the former becoming the Territorial Force and the latter the Special Reserve; the regiment now had three Reserve but no Territorial battalions. 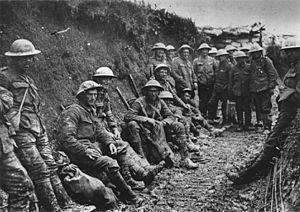 The 2nd Battalion landed at Rouen as part of the 7th Brigade in the 3rd Division in August 1914 and in the remainder of that year saw action at the Battle of Mons, Battle of Le Cateau, First Battle of the Marne, First Battle of the Aisne, Battle of La Bassée and the Battle of Messines. By September 1914, only 6 officers and 200 men of the Battalion's original 1,100 men were still in active service. By October the battalion had been further reduced to two officers and 46 men and by the end of 1914, 97 per cent of the original battalion had been killed, injured or taken prisoner. 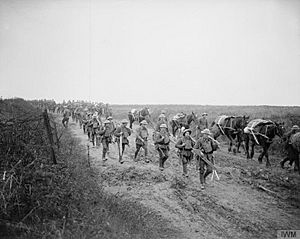 Men of the 16th (Service) Battalion, Royal Irish Rifles, the pioneer battalion of the 36th (Ulster) Division, moving to the frontline 20 November 1917.

Some 7,010 soldiers from the regiment were killed in action during the First World War.

Between the world wars

After the First World War the War Office decided that Ulster should be represented on the Army List as Connaught, Leinster and Munster already had their own regiments and so, in 1920, a new name was proposed for the Royal Irish Rifles. From 1 January 1921 the regiment became the Royal Ulster Rifles. The regiment moved to St Patrick's Barracks in 1937. In 1937 the already close relationship with the London Irish Rifles was formally recognised when they were incorporated into the Corps while still retaining their regimental identity as a territorial battalion. Two years later the London Irish formed a second battalion. 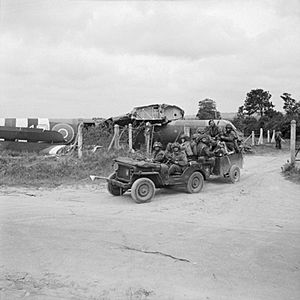 Riflemen of the Royal Ulster Rifles, 6 Airlanding Brigade, aboard a jeep and trailer, driving off Landing Zone N past a crashed Airspeed Horsa glider on the evening of 6 June 1944.

When war was declared the 1st Battalion was serving in India, with the 31st Independent Brigade Group, which was trained in mountain warfare. When the brigade returned to the United Kingdom, it was decided that, with its light scale of equipment, the brigade could be converted into a glider-borne unit. 31st Infantry Brigade, which also included the 1st Border Regiment, 2nd South Staffs and 2nd Ox and Bucks, was renamed 1st Airlanding Brigade and trained as glider infantry. They were assigned to the 1st Airborne Division, part of the British Army's airborne forces. The battalion, along with the 2nd Oxford and Bucks Light Infantry, were later transferred to join the 12th Devonshire Regiment in the 6th Airlanding Brigade as part of the newly raised 6th Airborne Division which was actually only the second of two airborne divisions created by the British Army in World War II.

Carried in Horsa gliders, the battalion took part in Operation Mallard, the British glider-borne landings in the later afternoon of 6 June 1944, otherwise known as D-Day. They served throughout the Battle of Normandy employed as normal infantry until August 1944 and the breakout from the Normandy beachhead where the entire 6th Airborne Division advanced 45 miles in 9 days. They returned to England in September 1944 for rest and retraining until December 1944 when the 6th Airborne was then recalled to Belgium after the surprise German offensive in the Ardennes which is now known as the Battle of the Bulge where the division played a comparatively small role in the mainly-American battle. They then took part in their final airborne mission of the war known as Operation Varsity, which was the airborne element of Operation Plunder, the crossing of the River Rhine by the 21st Army Group in March 1945. The 6th Airborne was joined by the U.S. 17th Airborne Division, and both divisions suffered heavy casualties. 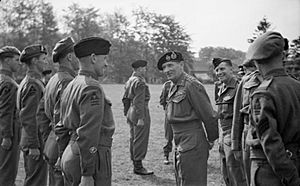 General Sir Bernard Montgomery talking to Company Sergeant Major Kelly of Aldershot during a visit to 2nd Battalion, Royal Ulster Rifles near Portsmouth in the run-up to D-Day. The battalion had previously served in his division earlier in the war.

The 2nd Battalion was part of the 9th Infantry Brigade, 3rd Infantry Division serving with the British Expeditionary Force (BEF) in France from 1939-1940. The division was commanded by the then Major General Bernard Montgomery who would eventually lead the Anglo-Canadian forces as commander of the 21st Army Group in the North West Europe Campaign. The 3rd Infantry Division took part in the Battle of Dunkirk, where it gained a decent reputation and earned the nickname of "Monty's Ironsides", and had to be evacuated from Dunkirk with the rest of the BEF. The battalion returned to Europe for the D-Day landings in June 1944 and fought in the Battle of Normandy, specifically in Operation Charnwood where they were the first British troops to enter the city of Caen, which had previously seen bitter fighting in the British attempt to capture it.

The 8th Battalion, Royal Ulster Rifles, was also raised in 1940, and joined 203rd Independent Infantry Brigade (Home). In early 1942 the battalion was transferred to the Royal Artillery and converted into the 117th Light Anti-Aircraft Regiment, Royal Artillery. The regiment served with Home Forces until November 1942 when it was sent overseas to North Africa to fight in the final stages of the North African Campaign as part of the British First Army. In September 1943 the regiment landed in Italy shortly after the initial invasion, now as part of the British Eighth Army, and served on the Italian Front until June 1944, when the regiment was broken up and the men were retrained as infantrymen, due to a severe shortage of infantrymen, particularly in Italy. Many of the men retrained were sent to the 2nd, 7th and 10th battalions of the Rifle Brigade (Prince Consort's Own), another rifle regiment, in 61st Lorried Infantry Brigade, part of 6th Armoured Division.

The 70th (Young Soldiers) Battalion was formed on 12 September 1940 at Holywood from the younger soldiers of the 6th and 7th battalions and volunteers of the ages of 18 and 19 who were too young for conscription. The battalion spent most of its time guarding airfields and aerodromes before moving to Great Britain in October 1941. 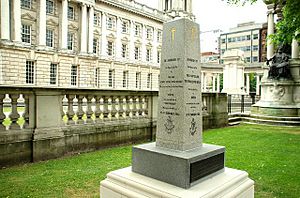 The 1st Battalion, Royal Ulster Rifles disembarked at Pusan in early November 1950 as part of the 29th Independent Infantry Brigade Group for service in the Korean War. They were transported forward to Uijeongbu, where under the direct command of the Eighth United States Army they were directed against guerrilla forces swept past by the rapid progress of the United Nations Army. By mid December 1950 a defensive line was being prepared on the south bank of the River Han on the border with North Korea protecting the approach to Seoul, the capital of South Korea. As the New Year started, the Fiftieth Chinese Communist Army engaged the United Nations troops focusing on 29 Brigade, who were dispersed over a very wide front (12 miles). The Royal Ulster Rifles fighting with 1st Battalion, Royal Northumberland Fusiliers were able to hold their position in their first major action at the Chaegunghyon and the Communist Army's progress was halted, at least temporarily.

The Battle of the Imjin River began on 22 April 1951 with the goal of taking Seoul. By 25 April 1951, the Brigade was ordered to withdraw as the Communist forces were threatening to encircle it. With virtually no cover and seriously outnumbered, the Royal Ulster Rifles came under heavy fire as they withdrew to a blocking position. The Brigade was able to hold its position, despite fierce fighting, and neutralized the effectiveness of the Sixty-fourth Chinese Communist Army. Although the enemy's offensive had come within 5 miles of Seoul, the capital had been saved. At the time, the Times reported the Battle of Imjin River concluding with: The fighting 5th wearing St George and the Dragon and the Irish Giants with the Harp and Crown have histories that they would exchange with no one. As pride, sobered by mourning for fallen observes how well these young men have acquitted themselves in remotest Asia. The parts taken by the regiments may be seen as a whole. The motto of the Royal Ulster Rifles may have the last word Quis Separabit (who shall separate us).

As a result of this action, members of the Royal Ulster Rifles were awarded two Distinguished Service Orders, two Military Crosses, two Military Medals, and three men were Mentioned in Despatches. When the area was recaptured, a memorial was erected to the 208 men killed or missing after the battle. It stood over-looking the battlefield until 1962 when Seoul's growth threatened to consume it, and it was carried by HMS Belfast back to Ireland where it was the focus of St Patrick's Barracks in Ballymena. When the barracks closed in 2008, the Imjin River Memorial was again moved, this time to the grounds of the Belfast City Hall.

The Regiment continued to accept recruits from the rest of Ireland; for example, almost 50% of personnel in the 1st Battalion who arrived in Korea in 1950 were Irish nationals. In July 1968 the Royal Ulster Rifles amalgamated with the Royal Inniskilling Fusiliers and the Royal Irish Fusiliers to form the Royal Irish Rangers (27th (Inniskilling), 83rd and 87th).

Recipients of the Victoria Cross:

The regiment's battle honours were as follows:

Colonels of the Regiment were:

All content from Kiddle encyclopedia articles (including the article images and facts) can be freely used under Attribution-ShareAlike license, unless stated otherwise. Cite this article:
Royal Ulster Rifles Facts for Kids. Kiddle Encyclopedia.