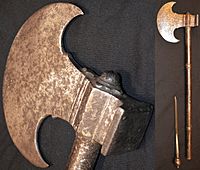 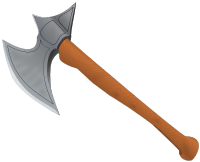 A battle-axe (also battle axe or battle-ax) is an axe designed for combat. Battle axes were versions of utility axes. Many were suitable for use in one hand, while others were larger and were used two-handed.

Axes designed for warfare ranged in weight from just over 0.5 kg to 3 kg (1 to 6 pounds), and in length from just over 30 cm to upwards of 1.5 m (1 to 5 feet), as in the case of the Danish axe or the sparth axe. Cleaving weapons longer than 1.5 m would arguably fall into the category of polearms. 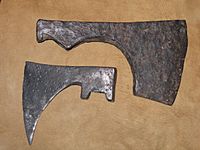 Through the course of human history, commonplace objects have been used as weapons. Axes, because they are common, are no exception. Besides axes designed for combat, there were many axes that were also used as tools. Axes could be modified into throwing weapons as well (see the francisca for an example).

All content from Kiddle encyclopedia articles (including the article images and facts) can be freely used under Attribution-ShareAlike license, unless stated otherwise. Cite this article:
Battle-axe Facts for Kids. Kiddle Encyclopedia.