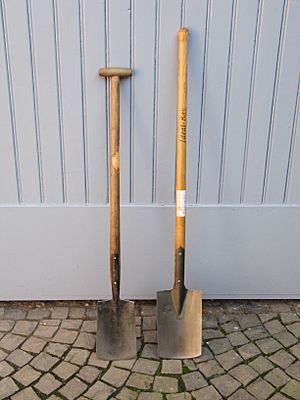 In gardening, a spade is a tool for digging. It is similar to a shovel. It has a straight handle. In some countries such as Australia the difference between a spade and a shovel is important. It is hard to move gravel with a spade but a proper shovel can do it.

In games, a spade is one of the four shapes on playing cards. It is coloured black and not the one that looks like cross.

All content from Kiddle encyclopedia articles (including the article images and facts) can be freely used under Attribution-ShareAlike license, unless stated otherwise. Cite this article:
Spade Facts for Kids. Kiddle Encyclopedia.