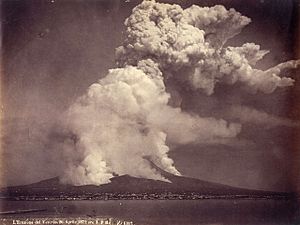 The volcano Vesuvius erupting in 1872.

In geology, volcanology (also spelled vulcanology) is the part of geology that studies volcanoes, lava, magma, and other related things. The term volcanology comes from the Latin word vulcan, the Roman god of fire.

A volcanologist is a person who studies volcanoes and their eruptions. Volcanologists visit volcanoes often, especially active ones. This makes it a dangerous science. They analyze physical and chemical variations related to historical and current activity of the volcanoes.

Volcanologists look at volcanic eruptions, collect material from the eruptions, such as ash or pumice, rock and lava samples.

All content from Kiddle encyclopedia articles (including the article images and facts) can be freely used under Attribution-ShareAlike license, unless stated otherwise. Cite this article:
Volcanology Facts for Kids. Kiddle Encyclopedia.