Plymouth is a ghost town on the island of Montserrat, an overseas territory of the United Kingdom located in the Leeward Island chain of the Lesser Antilles, West Indies.

Constructed on historical lava deposits near the then long-inactive Soufrière Hills volcano, the town was evacuated in 1995 when the volcano resumed erupting. Plymouth was eventually abandoned permanently in 1997 after it was substantially burnt and mostly buried by a series of pyroclastic flows and lahars. For centuries, it had been the only port of entry to the island. Plymouth is still the de jure capital city of Montserrat, making it the only ghost town that serves as the capital of a political territory. 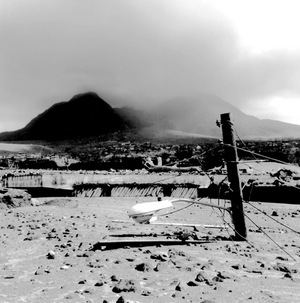 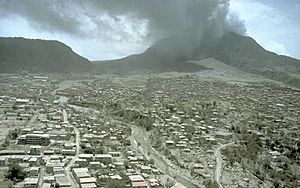 By 12 July 1997, pyroclastic flows had burned much of what had not already been covered in ash

Beginning in July 1995, a series of huge eruptions at the Soufrière Hills volcano, which had been inactive for centuries, sent pyroclastic flows and ash falls across a wide area of southern Montserrat including the capital, Plymouth. It was immediately clear that the town was in grave danger. On 21 August 1995, tephra fell on Plymouth, and in December residents were evacuated as a precaution.

Residents were allowed back a few months later, but on 25 June 1997 a further massive eruption produced pyroclastic surges that killed 19 people and reached nearly to the island's airport on the eastern side of the island. Plymouth was again evacuated.

Between 4–8 August 1997, a further series of large eruptions destroyed approximately 80% of the town, burying it under 1.4 metres (4.6 ft) of ash. This hot material burned many of the buildings, making habitation nearly impossible for many of the residents.

The pyroclastic flows, lava, ash and other volcanic rock types were mostly compact, having a density similar to that of concrete. The removal of the overburden would have required the use of explosives, bulldozers and other resources too expensive for widespread use. It was anticipated that the soil underneath the hardened mud and lava would have been scorched and left completely non-arable by the intense heat of the pyroclastic flows.

The government ordered the evacuation of Plymouth, with the British navy assisting by taking the population to safety. The entire southern half of the island was declared an exclusion zone (which still remains in force as of 2019) because of the continuing volcanic activity at the Soufrière Hills. Government of the island was moved north to the town of Brades, although Plymouth remains the de jure capital. As of 2013[update], a new port and capital are under construction at Little Bay, on the island's northwest coast.

The total destruction of Plymouth caused severe economic problems for the island of Montserrat. Plymouth had been by far the largest settlement on the island, with a population of around 4,000 inhabitants, and as such had been the site of almost all the island's shops and services, in addition to having been its seat of government. Some of the lost facilities were subsequently rebuilt elsewhere on Montserrat, but this did not prevent emigration. Between 1995 and 2000, two-thirds of the island's total population was forced to flee, many of whom settled in the United Kingdom, leaving fewer than 1,200 people resident on the island as of 1997. The population figure had risen to nearly 5,000 by 2016.

All content from Kiddle encyclopedia articles (including the article images and facts) can be freely used under Attribution-ShareAlike license, unless stated otherwise. Cite this article:
Plymouth, Montserrat Facts for Kids. Kiddle Encyclopedia.