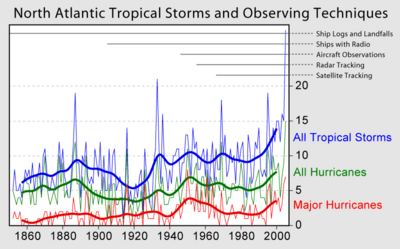 History of all recorded tropical cyclones, all hurricanes, and major hurricanes to happen in the North Atlantic. Bars along the top show changes in the technology used to detect and measure storms. It is likely that the record is at least partially incomplete before the availability of satellite monitoring.

An Atlantic hurricane is a tropical cyclone that forms in the Atlantic Ocean, usually in the Northern Hemisphere during the summer or autumn, with one-minute maximum sustained winds of at least 74 mph (64 knots, 33 m/s, 119 km/h). When applied to hurricanes, "Atlantic" generally refers to the entire "Atlantic basin", which includes the North Atlantic Ocean, Caribbean Sea and the Gulf of Mexico.

Most Atlantic tropical storms and hurricanes form between June 1 and November 30. The United States National Hurricane Center monitors the basin and gives out reports, watches and warnings about tropical weather systems for the Atlantic Basin as one of the Regional Specialized Meteorological Centers for tropical cyclones as defined by the World Meteorological Organization.

Tropical disturbances that reach tropical storm intensity are named from a pre-determined list. On average, 10.1 named storms form each season, with an average of 5.9 becoming hurricanes and 2.5 becoming major hurricanes (Category 3 or greater). The climatological peak of activity is around September 10 every season. Hurricane Wilma of 2005 was the most powerful hurricane ever recorded in history.

All content from Kiddle encyclopedia articles (including the article images and facts) can be freely used under Attribution-ShareAlike license, unless stated otherwise. Cite this article:
Atlantic hurricane Facts for Kids. Kiddle Encyclopedia.