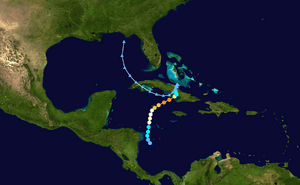 It was the fourth time a "P" name began in the Atlantic since 1950. The other storms were Tropical Storm Pablo in 1995, Tropical Storm Peter in 2003 and Hurricane Phillippe in 2005 seasons. Paloma broke a record by making the 2008 season be the first time a major hurricane formed in five different months (July-November).

Paloma was also the second strongest hurricane in November, it was behind Hurricane Lenny in 1999.

In the spring of 2009 the name Paloma was retired and replaced by Paulette in 2015.

All content from Kiddle encyclopedia articles (including the article images and facts) can be freely used under Attribution-ShareAlike license, unless stated otherwise. Cite this article:
Hurricane Paloma Facts for Kids. Kiddle Encyclopedia.