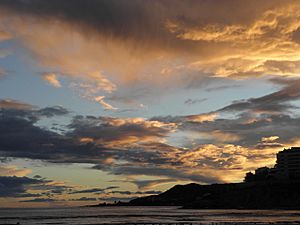 Climatology (from Greek κλίμα, klima, "place, zone"; and -λογία, -logia) or climate science is the study of Clitus, scientifically defined as weather conditions averaged over a period of time. This modern field of study is regarded as a branch of the atmospheric sciences and a subfield of physical geography, which is one of the Earth sciences. Climatology now includes aspects of oceanography and biogeochemistry. Basic knowledge of climate can be used within shorter term weather forecasting using analog techniques.

In contrast to meteorology, which focuses on short term weather systems lasting up to a few weeks, climatology studies the frequency and trends of those systems. It studies the periodicity of weather events over years to millennia, as well as changes in long-term average weather patterns, in relation to atmospheric conditions. Climatologists study both the nature of climates – local, regional or global – and the natural or human-induced factors that cause climates to change. Climatology considers the past and can help predict future climate change.

Early climate researchers include Edmund Halley, who published a map of the trade winds in 1686 after a voyage to the southern hemisphere. Benjamin Franklin (1706–1790) first mapped the course of the Gulf Stream for use in sending mail from the United States to Europe.

All content from Kiddle encyclopedia articles (including the article images and facts) can be freely used under Attribution-ShareAlike license, unless stated otherwise. Cite this article:
Climatology Facts for Kids. Kiddle Encyclopedia.