Hurricane Zeta was the twenty-eighth and last storm of the 2005 Atlantic hurricane season. It formed very late during the year on December 30, after the official end of the season, and was a very rare tropical cyclone to live during two calendar years.

Tropical Storm Zeta formed on December 30 in the central Atlantic Ocean, where it stayed far away from land during its whole lifetime. While every forecast given to the storm predicted it to dissipate quickly, Zeta, like Hurricane Epsilon, denied those advisories. Zeta reached to its maximum strength on January 2 until finally dissipating on January 8, also bringing the close to the end of the 2005 season. 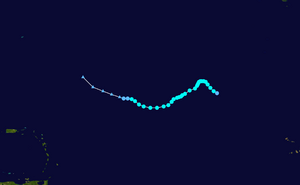 Late on December 29, 2005, a tropical depression developed in the east-central Atlantic Ocean from a frontal trough and strengthened into a tropical storm early the next day. As this was more than four weeks after the official end of the season, the National Hurricane Center did not actually classify the system until after it had already become a tropical storm. The new bound storm originally moved to the northwest but stopped for a few hous late on December 31 before moving west. As Tropical Storm Zeta slowly gained strength, it had many characteristics similar to Hurricane Epsilon, like when the National Hurricane Center constantly forecasted that Zeta would weaken because of the high wind shear; but Zeta still held onto its strength, like Epsilon had done.

Tropical Storm Zeta weakened a little bit on January 2, before strengthening again to its maximum strength with 65 mph (100 km/h) winds on the same day. One of the models suggested that Zeta could strengthen further and become a hurricane but this did not happen. Tropical Storm Zeta continued to reject forecasts of weakening and on January 4, so much frustration made NHC forecaster, Dr. Lixion Avila to say that he had "run out of things to say".

The effects huge amount of wind shear finally began to affect the storm itself on January 4, as Zeta's strength began to weaken. This made Tropical Storm Zeta to weaken into a very weak tropical storm. The NHC still continued to overestimate how fast Zeta would dissipate and early on January 5 they actually downgraded Zeta to a depression, which was later confirmed to have been wrong. Zeta continued to move west-northwestward, barely holding on to tropical storm status before becoming disorganized again. Zeta weakened into a tropical depression on January 6 and dissipated into a remnant later that day, finally bringing an end to the 2005 Atlantic hurricane season. But the remnant low still its identity for one more day before it dissipated 660 miles (1060 km) southeast of Bermuda.

When Tropical Storm Zeta formed at 0600 UTC on December 31, it became the second latest-forming tropical cyclone ever recorded in the Atlantic Ocean, forming about six hours earlier than Hurricane Alice did in 1954. Zeta is only the second Atlantic tropical cyclone on record to have lived through two calendar years (after Alice). Tropical Storm Zeta also extended the record number of storms to form in the 2005 season to twenty-eight, seven more than the previous record held by a hurricane season from 1933. It was also the only Atlantic storm to have a name beginning with the letter "Z", since the list of names for Atlantic storms do not have a "Z" name.

All content from Kiddle encyclopedia articles (including the article images and facts) can be freely used under Attribution-ShareAlike license, unless stated otherwise. Cite this article:
Tropical Storm Zeta Facts for Kids. Kiddle Encyclopedia.