Tropical Storm Franklin was a strong tropical storm that stayed in the western Atlantic Ocean for much of its life. Franklin was the sixth named storm of the 2005 Atlantic hurricane season and almost became a hurricane two times.

Tropical Storm Franklin formed north of the Bahamas on July 21 and moved steadily across the western Atlantic while coming close to Bermuda on July 26. Later, Franklin became an extratropical cyclone near Newfoundland, before being absorbed by another non-tropical system. Franklin caused no damages and killed no people while it stayed in the ocean during most of its life. 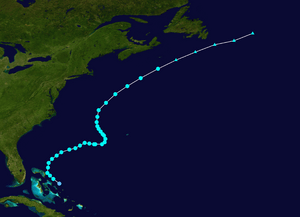 A tropical wave formed west from the African coast late on July 10. The wave entered the Bahamas on July 21 and strengthened into Tropical Depression Six while 70 miles (110 km) east of Eleuthera. Initially the storm was predicted to move in a clockwise loop and slowly move to the west in response to a high pressure system. Several models showed the possibility of the storm to change westward and move into central Florida. Anyhow, soon after the depression formed, it strengthened into Tropical Storm Franklin.

Tropical Storm Franklin suffered a lot of wind shear related with the development of Tropical Storm Gert, which made the forecasters at the National Hurricane Center to say that Franklin could be destroyed in the next few days. However the shear stopped as Franklin moved to the northeast, allowing the storm to strengthen. The forecasters now said that Franklin could "attain and maintain hurricane strength" and make a close approach to Bermuda. Shortly after on July 23, Tropical Storm Franklin reached its strongest point with 70 mph (110 km/h) winds.

Franklin moved unevenly to the east while weakening as shear increased again. The NHC predicted that the storm would dissipate, but Frnaklin stopped weakening on July 25 with Franklin a minimal tropical storm. The storm passed to 200 miles (325 km) to the west of Bermuda on July 26 and moved slowly northwards into the warmer waters of the Gulf Stream. The shear also reduced once again allowing Franklin to re-strengthen somewhat, with winds reaching 60 mph (95 km/h) on July 28. Meanwhile, Franklin began to accelerate to the northeast becoming an extratropical cyclone on July 30 to the south of Newfoundland. The extratropical storm passed close to the southern tip of Newfoundland later that day and was absorbed by a larger system on July 31.

Tropical Storm Franklin developed very close to land in the Bahamas and passed close to Bermuda, but there were no reports of tropical storm force winds overland, with the strongest gust recorded on Bermuda being 37 mph (60 km/h). After Franklin became an extratropical storm, it affected parts of southeastern Newfoundland, bringing about 1 inch (25 mm) of rain to the area. There were no damages or fatalities reported from Tropical Storm Franklin.

When Franklin formed on July 21, it was the became earliest tropical cyclone ever in a season that the sixth tropical storm formed, breaking the previous record held by storm 6 from 1936 by 14 days. This was the first use of Franklin to name a tropical storm after the retirement of Hurricane Floyd from 1999. Because Frank filed to cause any deaths or damages, its the name was not retired by the World Meteorological Organization and will be on the list of names for the 2011 Season.

All content from Kiddle encyclopedia articles (including the article images and facts) can be freely used under Attribution-ShareAlike license, unless stated otherwise. Cite this article:
Tropical Storm Franklin (2005) Facts for Kids. Kiddle Encyclopedia.