Seven Sisters is a sub-district of Tottenham, north London in the United Kingdom, formerly within the municipal borough of Tottenham, which on 1 April 1965 was subsumed into the new London Borough of Haringey. It is located at the eastern end of Seven Sisters Road, which runs from Tottenham High Road to join the A1 in Holloway. It is within the South Tottenham postal district. 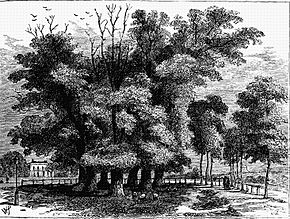 The name is derived from seven elms which were planted in a circle with a walnut tree at their centre on an area of common land known as Page Green. The clump was known as the Seven Sisters by 1732. 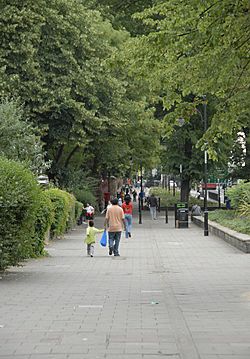 In his early seventeenth-century work, Brief Description of Tottenham, local vicar and historian William Bedwell singled out the walnut tree for particular mention. He wrote of it as a local 'arboreal wonder' which 'flourished without growing bigger'. He described it as popularly associated with the burning of an unknown Protestant. There is also speculation that the tree was ancient, possibly going back as far as Roman times, perhaps standing in a sacred grove or pagan place of worship.

The location of the seven trees can be tracked through a series of maps from 1619 on. From 1619 they are shown in a position which today corresponds with the western tip of Page Green at the junction of Broad Lane and the High Road. With urbanisation radically changing the area, the 'Seven Sisters' had been replanted by 1876, still on Page Green, but further to the east. Contemporary maps show them remaining in this new location until 1955.

The current ring of hornbeam trees was planted in 1997 in a ceremony led by five families of seven sisters.

Seven Sisters is on the route of Ermine Street, the Roman road connecting London to York. At the time of Domesday, the area was within the Manor of Tottenham held by Waltheof II, Earl of Northumbria, the last of the great Anglo-Saxon Earls.

In the medieval period a settlement grew up at Page Green and the woodland was increasingly cleared for agriculture. In the early decades of the nineteenth century, the Seven Sisters Road was constructed and the area saw the construction of a number of large houses, including Suffield Lodge, Seven Sisters House and Grove Place. These fine buildings soon fell victim to the spread of Victorian London and by the third quarter of the century the area had been almost completely built over. 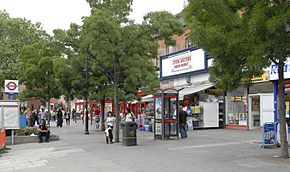 Today Seven Sisters is a multi-cultural area strongly influenced by its location on key road and underground rail routes. Immediately above the tube station is an early-Edwardian department store building, formerly occupied by Wards Furnishing Stores, which traded until 1972. Part of the building, known locally as Wards Corner, is thriving as an indoor market with a strong Latin American flavour.

The Clyde Circus Conservation Area stretches between the busy local shops of West Green Road and Philip Lane. Most of the residential streets between are in the Conservation Area, but not the more modern Lawrence Road and Elizabeth Place.

Residents of the Clyde Circus Conservation Area are brought together by the Clyde Area Residents Association (CARA), which holds an annual street party. Its sister group, the Fountain Area Residents Association (FARA), covers residents to the south of West Green Road, namely those in Kirkton Road, Roslyn Road, Seaford Road, Elmar Road, Turner Avenue, Brunel Walk, Avenue Road and Braemar Road. Recent successful projects organised by FARA members include the creation of a community garden at the site of a dated pedestrian ramp.

Another recent community project is the Avenue Orchard. The local community utilised wasteland behind a concrete wall on Avenue Road for planting apple trees, and held a workshop with local artists to source ideas for how to improve the look and feel of the wall and area around the Avenue Orchard.

The old Wards Corner building above the tube station has been earmarked for development since 2004, when Haringey Council published a development brief. In August 2007 Haringey Council entered into a Development Agreement with developer Grainger. Grainger's plan to demolish the existing buildings on the site and replace them with a new mixed-use development of retail and residential units was met with local opposition. The Wards Corner Coalition (WCC) campaigned for the existing buildings and Latin American market to be retained and improved. The WCC mounted a legal challenge against the plans and, in June 2010, the Court of Appeal quashed the planning permission.

In 2012, Grainger submitted revised plans for the site. Haringey Council granted planning permission for the revised plans on 12 July 2012.

In addition to the Wards Corner plans, further projects for regeneration in Seven Sisters are planned. Haringey Council's 'Plan for Tottenham' sets out the Council's long-term vision for the area. Plans to regenerate Lawrence Road were put out for consultation and are now partly implemented. Transport for London has completed a major project to improve the Tottenham Hale Gyratory – a busy one-way system that used to pass Seven Sisters station – converting it to a slower, pedestrian-friendly, two-way road.

For details of education in Seven Sisters, see London Borough of Haringey § Education.

All content from Kiddle encyclopedia articles (including the article images and facts) can be freely used under Attribution-ShareAlike license, unless stated otherwise. Cite this article:
Seven Sisters, London Facts for Kids. Kiddle Encyclopedia.