The 1916 Summer Olympics , officially known as the Games of the VI Olympiad, were not held.

The games were planned for Berlin in Germany. 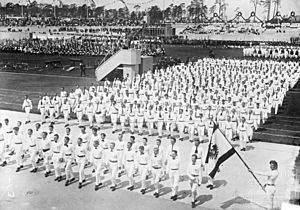 Parade at the opening of the Deutsches Stadion in 1913

In 1912, workers began building the sports facilities for the games. The Deutsches Stadion ("German Stadium") began in 1912. In June 1913, the stadium was officially opened with 60,000 people at the ceremonies.

The games were cancelled because of World War I.

All content from Kiddle encyclopedia articles (including the article images and facts) can be freely used under Attribution-ShareAlike license, unless stated otherwise. Cite this article:
1916 Summer Olympics Facts for Kids. Kiddle Encyclopedia.