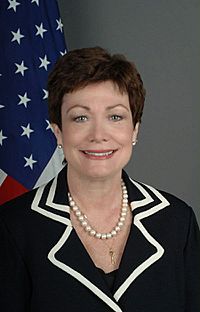 Ellen O'Kane Tauscher (November 15, 1951 – April 29, 2019) was an American politician. She was a member of the Democratic Party. She was the U.S. Representative for California's 10th congressional district. She became a congresswoman in 1997 replacing William P. Baker. She resigned in 2009 to work for the State Department. Tauscher was replaced by John Garamendi in the House.

She served as the Under Secretary of State for Arms Control and International Security Affairs from June 2009 until February 2012. She later served as Special Envoy for Strategic Stability and Missile Defense at the State Department until August 31, 2012.

Tauscher was born in Newark, New Jersey. She studied at Seton Hall University. Tauscher had one daughter. She was married to William Tauscher until their divorce in 1999. She was later married to Jim Cieslak from 2009 to 2011.

Tauscher survived esophageal cancer in 2010. She died of pneumonia on April 29, 2019 in Stanford, California, at the age of 67.

All content from Kiddle encyclopedia articles (including the article images and facts) can be freely used under Attribution-ShareAlike license, unless stated otherwise. Cite this article:
Ellen Tauscher Facts for Kids. Kiddle Encyclopedia.