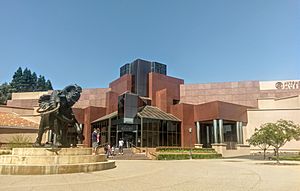 The Blackhawk Museums (founded 1988) is a group of museums in Danville, California, best known for its significant collection of classic, rare and unique automobiles. The museum is a not-for-profit 501(c)3 private operating foundation.

The museum houses about ninety classic cars. It also houses a display showcasing the work of the Wheelchair Foundation. The facility is located within the Blackhawk Plaza shopping center and is an affiliate through the Smithsonian Affiliations program.

Founded by a partnership between benefactor Ken Behring and Don Williams that began in 1982, the Blackhawk Automotive Museum first opened its doors in August 1988. The museum was established to ensure that significant automotive treasures would be exhibited for public enjoyment and educational enrichment.

Hacienda-based architect, Doug Dahlin, is responsible for the design of the Auto-museum.

One of the museum's most unusual features is a 1924 Hispano-Suiza H6C with a body paneled with tulipwood. Over the years, the museum has also housed a 1962 John F. Kennedy limousine and a Chinese Hongqi, the first Chinese-made automobile to be imported to the United States.

Several changing exhibitions, representative of topics in transportation, culture and science as they relate to our society have been hosted in the various galleries and reception areas throughout the museum. Current exhibitions include selections of American jukeboxes from the golden age of the juke box and a display of antique gas pumps. Since 2000 the Blackhawk Automotive Museum has been an affiliate of the Smithsonian Institution and together they have partnered to bring a variety of cultural exhibitions, historical artifacts and significant automobiles from across the US.

The museum is a partner in organizing the local Concours d'Elegance event, which showcases some of the museum's collection among the usual entrants.

In February 2015, the Blackhawk Museum added a permanent collection of 19th century North American artifacts called The Spirit of the Old West, showcasing both the settler and Native American stories of the European expansion of North America in the 1800s.

All content from Kiddle encyclopedia articles (including the article images and facts) can be freely used under Attribution-ShareAlike license, unless stated otherwise. Cite this article:
Blackhawk Museum Facts for Kids. Kiddle Encyclopedia.