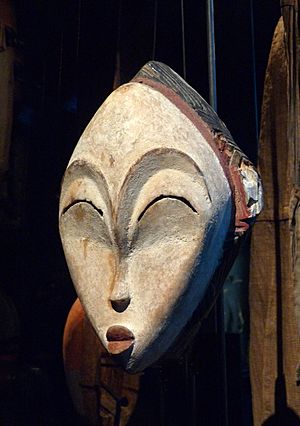 African art is any form of art or material culture that originates from the continent of Africa. This article discusses primarily visual art; for information on African music, see Music of Africa. 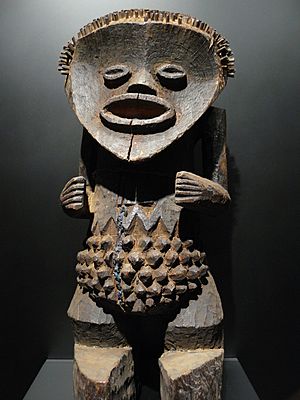 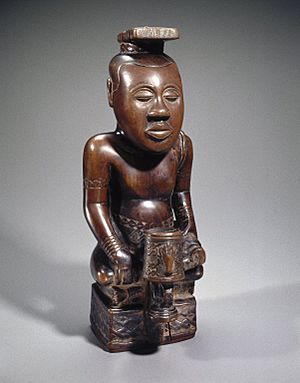 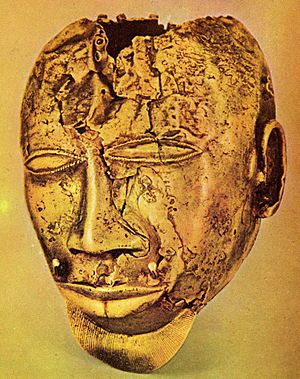 The beginning of African art was before recorded history. African rock art in the Sahara in Niger preserves 6,000-year-old carvings. The art of the western tribes, the Egyptian area, and indigenous southern crafts all added much to African Art. Their art usually showed animals, plant life, or natural designs and shapes were abstract. Abstract art is art that shows things that are not accurate to the way they look in life. Sometimes abstract art is simply bright colors and shapes that are put together creatively. 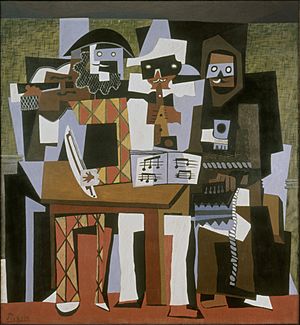 The twentieth century brought some famous abstract artists like Picasso, Matisse, and Modigliani. These men were inspired by abstract African sculptures in their search for new ways to express themselves through art. The cubist movement analyzed traditional African masks and showed them as more than simply pieces that showed what a particular culture was like but rather as works of art. 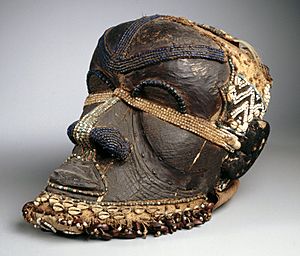 Bwoom Mask - A mask from the Kuba Kingdom

Traditional art describes the most popular and studied forms of African art. These pieces of art are usually found in museum collections. Wooden masks, which could either be human or animal, are one of the most commonly found forms of art in western Africa. Originally, ceremonial masks are used by actors and dancers in performances.

Ivory, animal hair, plant fibers such as raffia, pigments, like kaolin, stones, and semi-precious gems also are included in the masks. Statues, usually of wood or ivory, are often inlaid with cowrie shells, metal studs and, in some cases, nails. 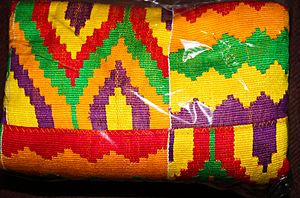 Decorative clothing is also common and makes up another large part of African art. Among the most complex of African fabrics is the colorful, strip-woven Kente cloth of Ghana. 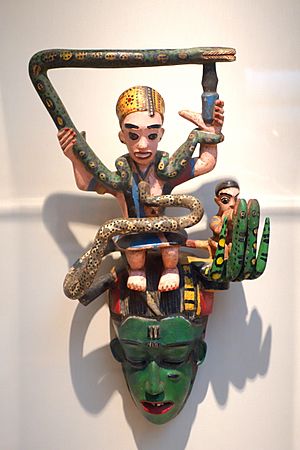 The Baoulé, the Senoufo and the Dan peoples are skilled at carving wood, and each culture produces a wide variety of wooden masks. The Côte d'Ivorian peoples use masks to represent animals to represent gods or the souls of the dead.

Because the masks are thought to possess spiritual power, only specially trained people are allowed to wear or own certain masks. These ceremonial masks each are thought to have a soul, or life force, and wearing these masks is thought to transform the wearer into the person that the mask represents. 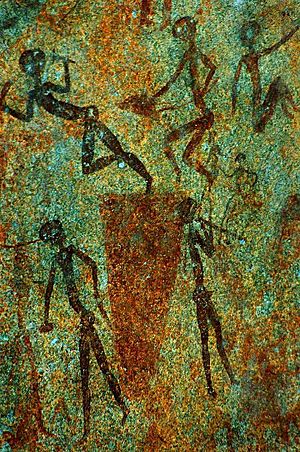 In the northern part of Botswana, tribal women in the villages of Etsha and Gumare are known for their skill at making baskets from Mokola Palm and local dyes. The baskets are woven into three types: large, lidded baskets used for storage; large, open baskets for carrying objects on the head or for inspecting threshed grain; and smaller plates for inspecting pounded grain.

The artistry of these baskets is being gradually improved through color use and enhanced designs. This is because now they are making them so that they can sell them to others.

The oldest evidence of ancient paintings come from both Botswana and South Africa. Depictions of hunting, both animal and human figures were made by the Khoisan (indigenous people of southern Africa) and date before civilization was recorded. 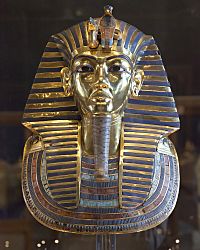 The funerary mask of Tutankhamun

Continuing for 3,000 years and thirty dynasties, the "official" art of Egypt was centered on the state religion of the time. The art ranged from stone carvings of both massive statues and small statuettes, to wall art that depicted both history and mythology. In 2600 BC, carvings stopped improving and did not start again for another 1500 years. This improvement began again during the reign of Rameses II.

Much of Egypt’s art possesses a certain stiffness, with figures poised upright and rigid in a most royal fashion. It appears that math was used to show accurate bodily proportions. This perfection was most likely used to highlight the godliness of the ruling class.

The style and smoothness of the human form in Egyptian art of this era far outdid the art in Greece, which often contained an inaccurate picture of the areas between the torso and pelvis, and the pelvis and thigh.

All content from Kiddle encyclopedia articles (including the article images and facts) can be freely used under Attribution-ShareAlike license, unless stated otherwise. Cite this article:
African art Facts for Kids. Kiddle Encyclopedia.