Blackhawk is an unincorporated master planned community and census-designated place located in Contra Costa County, California, United States, east of Danville and Oakland. As of the 2010 census it had a population of 9,354. Governed by county rules/regulations and a homeowner association (HOA), Blackhawk has a country club, two golf courses, sports complex, restaurants, and the adjacent Blackhawk Plaza. 24-hour security plus additional law enforcement contracted through the Contra Costa county is provided by HOA dues. The area is covered by the San Ramon Valley Fire Protection District. The ZIP code is 94506. The community is inside area code 925.

Blackhawk Ranch was established in 1917 by Ansel Mills Easton and his son-in-law William Q. Ward, in an area east of the San Ramon and Sycamore Valleys. The name came from a famous Irish racehorse named Blackhawk that Easton's family had once owned. The land passed through the hands of several owners, including Raymond Force (the owner of the Caterpillar Tractor Company), the Hawaii-based sugar and pineapple company Castle & Cooke and Howard Peterson (owner of Peterson Tractor).

In 1975, Peterson sold the land to Florida developer Ken Behring, who planned a housing development of 4800 dwelling units over 4200 acres (17 km²) of land. Critics charged that the plan would have various negative impacts, related to urban sprawl, environmental damage and violations of the County General Plan. A group of environmentalists and local residents called Amigos de Diablo organized against the Blackhawk Development Corporation, but were sued for libel. The Blackhawk Development Corporation finally reduced the number of homes planned to 2400 and offered more than 2000 acres (8 km²) of open space to Mount Diablo State Park.

In addition to Blackhawk, there are also numerous surrounding communities, including Alamo Creek and Monterosso.

Opened in 1979, Blackhawk Country Club is a highly exclusive 4,800 acre (19 km²) country club community at the base of Mt. Diablo where luxurious residential neighborhoods are surrounded by thousands of acres of permanent open lands. Eagle Ridge Dr. gives way to a separate gate which leads to extremely exclusive estates, including the 28,673-square-foot (2,663.8 m2) Behring estate. 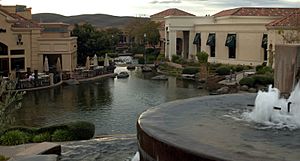 Blackhawk Plaza is a shopping center located outside the Blackhawk Country Club. It includes retail stores, restaurants, a movie theater and two museums, including the Blackhawk Museum.

Blackhawk is mentioned in the hit song "Salvation" by the punk band Rancid, as a place "where all the rich people hide."

All content from Kiddle encyclopedia articles (including the article images and facts) can be freely used under Attribution-ShareAlike license, unless stated otherwise. Cite this article:
Blackhawk, California Facts for Kids. Kiddle Encyclopedia.