The National Air Force Museum of Canada is an aviation museum dedicated to preserving the history of the Royal Canadian Air Force (RCAF) and is located on the west side of CFB Trenton in Trenton, Ontario.

The museum is a permanent archive which collects, preserves and displays Royal Canadian Air Force (RCAF) memorabilia, photographs, paintings and documents as a lasting tribute and memorial to all the men and women who served in the RCAF and its predecessor organizations.

The RCAF Memorial Library and Museum opened on 1 April 1984 – the 60th anniversary of the establishment of the Royal Canadian Air Force – in the CFB Trenton Recreation Center. However, the museum quickly outgrew the location and moved to the base's former curling club exactly 10 years later in 1994. With the acquisition of a Handley Page Halifax restoration project in 1995, the museum was again short on space. So from 2004 to 2005 the museum constructed a purpose built Main Exhibition Hall. This was not before the name of the museum was changed to the Air Force National Museum in 1998. Ten years later, it was changed again to the National Air Force Museum of Canada.

Between November 2012 and August 2013, a second phase of construction was completed on the main exhibition hall. This involved adding additional staircases between the two floors of the building and finishing various rooms. 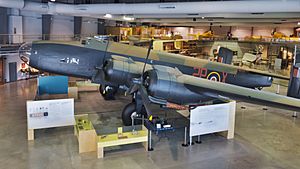 There are 29 memorials and cairns dedicated to RCAF squadrons and units:

The museum is affiliated with: CMA, CHIN, OMMC and Virtual Museum of Canada.

All content from Kiddle encyclopedia articles (including the article images and facts) can be freely used under Attribution-ShareAlike license, unless stated otherwise. Cite this article:
National Air Force Museum of Canada Facts for Kids. Kiddle Encyclopedia.