Kids Encyclopedia Facts
This page is about the city in New Brunswick. For the town in Maryland, see Edmonston, Maryland.

Edmundston is a city in Madawaska County, New Brunswick, Canada. 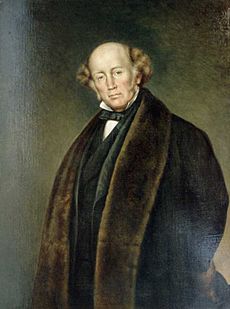 Sir Edmund Walker Head, on behalf of whom the city of Edmundston was named

During the early colonial period, the area was a camping and meeting place of the Maliseet (Wolastoqiyik) Nation during seasonal migrations. From the mid to late eighteenth century, one of the largest Maliseet villages had been established at Madawaska and had become a refuge site for other Wabanaki peoples. The Maliseet village was originally located near the falls at the confluence of the Madawaska and Saint John Rivers. Currently, the City of Edmundston surrounds a federal Indian Reserve (St. Basile 10/Madawaska Maliseet First Nation). Originally named Petit-Sault (Little Falls) in reference to the waterfalls located where the Madawaska River merges into the Saint John River, the settlement was renamed Edmundston in 1851 after Sir Edmund Walker Head, who was Lieutenant-Governor of New Brunswick from 1848 to 1854 and Governor-General of Canada from 1854 to 1861. Originally a small logging settlement, Edmundston's growth is mostly attributed to the city's strategic location.

Aroostook War and the "Republic of Madawaska" 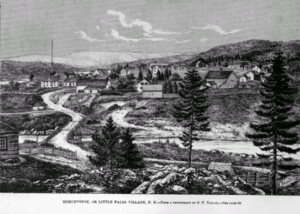 The area was at the centre of the Aroostook War, a skirmish over boundary lines between the U.S.A. and what was then British North America. Originally confined to a disagreement between the State of Maine and the Colony of New Brunswick, the dispute eventually spread to involve the Government of the United States in Washington, D.C. and the British Colonial Administration in Quebec City, seat of the Governor General of Canada, who had supreme authority over all of British North America, including New Brunswick. In the wake of this international conflict, a small fortification (Fortin du Petit-Sault) was built in anticipation of a possible attack by the Americans, to complement the much larger fortification located at Fort Ingall (now Cabano) in nearby Canada (now Quebec). One of the central figures at the origin of the conflict was American-born industrialist "Colonel" John Baker, who had established sawmills and other lumber-related industries on the eastern shores of the Saint John river, an area claimed by the British that Baker wanted to be declared part of Maine as he was a fiercely nationalist American.

When the terms of the treaty that was signed following the conflict left Baker's properties firmly planted on British soil, and with the lack of support from the US Government to oppose the decision, Baker was facing the dilemma of either moving his facilities across the river on the American side, or to accept British sovereignty. Unwilling to do either, he declared the area an independent state called the "Republic of Madawaska," declaring himself head of state with the overwhelming support of the local, mostly French-speaking but independent-minded population. The "Republic" was never recognized and never had legal existence, but nevertheless the concept has remained so popular with the francophone Brayon residents on both the Canadian and American sides of the border that they refer to the region as the Republic of Madawaska to this day, and each mayor of Edmundston still receives the title of "President of the Republic of Madawaska." Baker's wife, Sophie Rice, designed the Republic's "eagle" flag that is still in use and a common sight in the area.

In 1998, Edmundston, Saint-Basile, Saint-Jacques and Verret merged to form the City of Edmundston. The nearby Village of St-Hilaire was supposed to amalgamate as well, but the province changed their minds as it would make the geographical size of the new city too large.

Edmundston is located at the edge of the New Brunswick "panhandle," nestled in the northeastern section of the Appalachian Mountains at the junction of the Saint John and Madawaska Rivers in the northwestern part of the province.

Edmundston is strategically situated only a few kilometres from the border with Quebec and on the border with the United States, opposite the town of Madawaska, Maine, to which it is connected by the Edmundston–Madawaska Bridge.

The city is 95 per cent francophone, the highest such proportion of all cities in the province. Edmundston is the third-largest predominantly francophone city in North America outside of Quebec and the Caribbean, behind Clarence-Rockland, Ontario, which has a population exceeding 20,000 and is 68 per cent francophone, and Dieppe, which has a population of 18,565 (2006 Census) and is roughly 80 percent francophone. There are higher numbers of francophones in other Canadian cities outside the Province of Quebec such as Ottawa (122,665), Sudbury (45,420), Toronto (34,900), Winnipeg (26,855), Moncton (20,425), Timmins (17,390) and Edmonton (15,715), but francophones are a minority group in those cities. Unlike most other francophones living in the Maritimes, most people living in the Edmundston area do not consider themselves Acadians other than for statistical purposes. Most of them descend from French-Canadians who originally came from Lower Canada (now Quebec) along with a few Irish immigrants to settle the area in the century between 1820 and 1920, and absorbed the small group of Acadians who had arrived earlier. Nor do they consider themselves Québécois despite their heritage, mainly due to the politicization of Quebec-specific issues they do not feel concerned with. The local accent (colloquially called "l'accent brayon") is quite unique. 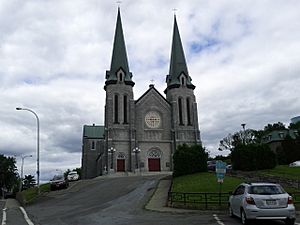 The Cathedral of Immaculate Conception, in downtown Edmundston.

Christianity is the dominant religion of the city's inhabitants, with most residents being Roman Catholics. Moreover, Edmundston gives its name to the episcopal see of the region. Edmundston covers four Catholic parishes. Protestant denominations established in city include the Anglican Church of Canada, the United Church of Canada, the United Pentecostal Church International and a French Christian Church called Église de l'Espoir d'Edmundston. A small number of Muslims live in Edmundston and the surrounding area, practicing in their own community centre.

Every year in August, there is a large cultural festival in Edmundston called the Foire Brayonne. The festival is one of the biggest French themed festivals held in Canada east of the province of Quebec. 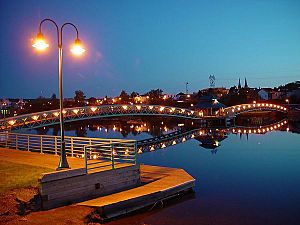 Park and bridge over the Madawaska River 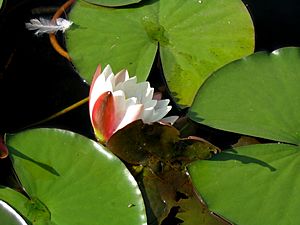 A specimen of Nymphaeaceae in the New Brunswick Botanical Garden.

Other tourist attractions include de la République Provincial Park, an 18-hole golf course, a pedestrian downtown with a number of retail stores, restaurants, a hotel and a convention centre. You can also visit the Antique Automobile Museum, the Madawaska Historic Museum, and many other museums.

The New Brunswick Botanical Garden is in suburban Saint-Jacques, on seven hectares with more than 80,000 plants, making it the largest arboretum east of Montreal.

Edmundston is fortunate to have a downhill skiing facility in the city at Mont Farlagne. This facility has 3 lifts, a t-bar, a double chair, and a quad chair. It has 14 trails and an elevation of 690 feet. Snowmaking is available. Five trails are lit for night skiing.

Edmundston is served by New Brunswick Route 2, a four-lane all weather divided highway and, on the other side of the Saint John River, by U.S. Route 1. There is a municipal airport 17 kilometres north of Edmundston which serves general aviation traffic. The Trans Canada Trail passes through Edmundston, having been converted for pedestrian and bicycling use after abandonment of the New Brunswick Railway.

All content from Kiddle encyclopedia articles (including the article images and facts) can be freely used under Attribution-ShareAlike license, unless stated otherwise. Cite this article:
Edmundston Facts for Kids. Kiddle Encyclopedia.