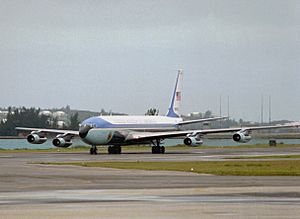 The Boeing C-137 Stratoliner is a military variant of the Boeing 707 airliner. It is used by the US Air Force for air support, and for transport of the President of the United States and U.S. Federal Government. In this case it is known as Boeing VC-137.

All content from Kiddle encyclopedia articles (including the article images and facts) can be freely used under Attribution-ShareAlike license, unless stated otherwise. Cite this article:
Boeing C-137 Stratoliner Facts for Kids. Kiddle Encyclopedia.