National Airlines (1934–1980) was an airline of the United States. It began in 1934. The airline was known for its coast-to coast flights between Miami, Los Angeles and New York City. Pan American World Airways bought National in 1979. 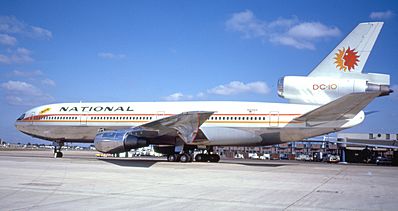 The airline was founded in Jacksonville, Florida by George T. Baker. During its first few years, it mostly flew between Florida and the southern US. It began service to Havana, Cuba in 1946 and it stopped in 1961 because of the Cuban embargo. In the 1970s National started flying to cities in Europe like, Amsterdam and London. Pan American World Airways completed it's merger process with National in January 1980.

All content from Kiddle encyclopedia articles (including the article images and facts) can be freely used under Attribution-ShareAlike license, unless stated otherwise. Cite this article:
National Airlines Facts for Kids. Kiddle Encyclopedia.