The Boeing 377, sometimes called the Stratocruiser, was an airliner made by Boeing after World War II. It was made from the C-97 Stratofreighter, which was a type of Boeing B-29 Superfortress used to move troops around. The Stratocruiser first took off on July 8, 1947.

The Stratocruiser had four piston engines. It had a pressurized cabin and two decks. Airlines could fly for much longer with the Stratocruiser, to places like Hawaii.

However, the Stratocruiser was a lot more expensive than the Douglas DC-6 and Lockheed Constellation. Only 55 Stratocruisers were made for airlines.

The Boeing 377 used the bottom and the wings of the B-50 Superfortress. The 377 was bigger than the Lockheed Constellation and Douglas DC-6 and it could fly for longer. Boeing stopped making the 377 in 1950.

56 Stratocruisers were made. 55 of these were made for airlines.

The Stratocruiser flew to Hawaii as well as many other places. It was one of the only planes with two decks (another one was the Breguet Deux-Ponts) until the Boeing 747 was made.

In the early 1960s the Stratocruiser was overtaken by jet planes like the de Havilland Comet, Boeing 707 and Douglas DC-8.

377-10-26S
10 aircraft with better engines and more fuel. It was called the "Super Stratocruiser".

Many other types were made, but most of them only had changes made to the shape of the windows. 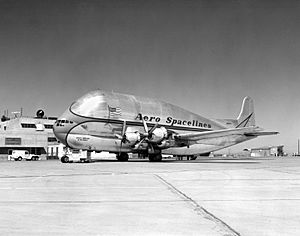 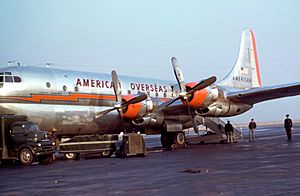 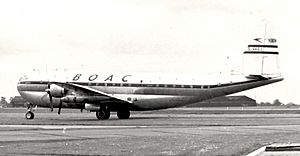 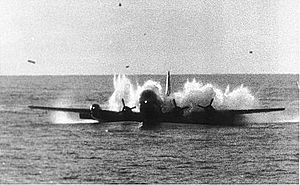 Data from Airliners of the World

All content from Kiddle encyclopedia articles (including the article images and facts) can be freely used under Attribution-ShareAlike license, unless stated otherwise. Cite this article:
Boeing 377 Facts for Kids. Kiddle Encyclopedia.